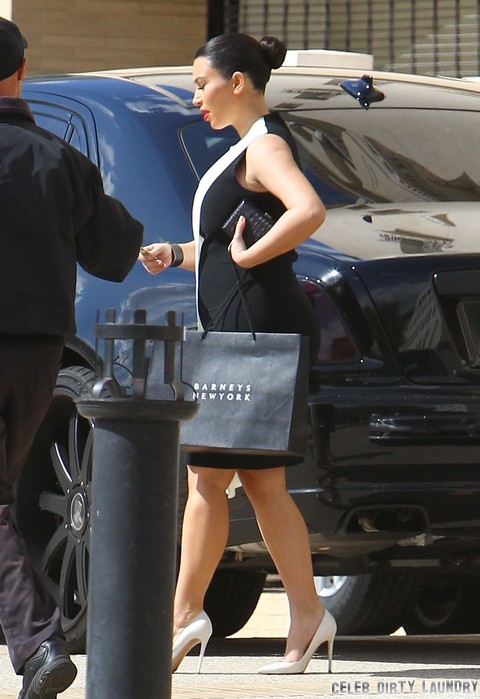 The Kardashian sisters are known for curvy figures and luscious hair, but have drastically different sense of style. Khloe Kardashian described her look as “ghetto-fab,” citing excessive bling and fitted jeans as her staples. Mother of two Kourtney Kardashian says she goes “eclectic and quirky,” favoring “natural with very little makeup.” And Kim Kardashian? The pregnant reality star has been hesitant to transition into maternity wear, and instead squeezes herself into skin-tight dresses that are heavy on cleavage.

When she and Kanye West first appeared on Keeping Up With The Kardashians together, we were shocked to watch her nod quietly as he emptied her closet, replacing it with his own preferences. According to Kim, he’s still not happy with her wardrobe! In an interview with Us Weekly, print edition March 4, 2013, Kim jokes that he doesn’t have a favorite outfit, then qualifies that “he likes cool, drapey things. Very casual.” Jokester Khloe interrupts and explains that “to him, casual is not casual. It’s what you wear to the Oscars!”

While it’s unfair to stereotype, I’d like to point out the characteristics of a sincere boyfriend. While most want their partner to be clean, groomed, and properly outfitted for a given occasion, Kanye sets ridiculous standards. Kim is pregnant, yet still roaming in 7-inch platform heels, full make up, and revealing outfits. I’ve never been pregnant, but the style consensus among those I know who have had babies tends to be more on the slip on or elastic waistband side of fashion. I’m not saying Kim should rebel and don a Juicy Couture track suit and UGG slippers, but would boot-cut jeans and a cozy sweater be pushing the envelope?

Kim joked: “I dress for my man way more than for myself!” But is she taking it too far? It seems like Kanye is trying to change everything about her—her style, work, family life, TV work—and we have to ask, when will she draw the line? A relationship should be a two way street, and we don’t see Kanye making any compromises for her! As obnoxious as I find the reality star, I can’t help but feel bad for her! She seems naïve—a young woman, abused by her mom, who desperately wants unconditional love, and will break her back to get it. Is Kanye a good match for Kim?