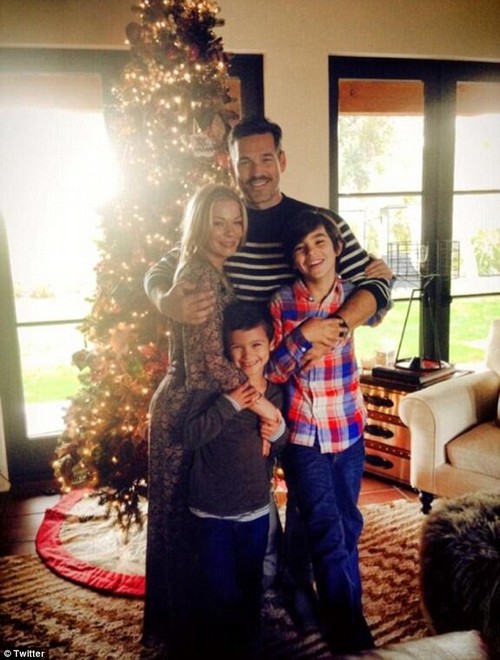 It has been said that LeAnn Rimes has hired herself a new PR team to help clean up the absolute mess she has made of her public image. This is no easy task because LeAnn has left a trail of bad behavior and horrific tweets that exposed her true colors and landed her on the Most Hated Celeb list. Hey, LeAnn even took time out from her busy life to call me a ‘horrific “human being”‘ for reporting on her bad bahavior!

LeAnn is – among other things – stubborn. She doesn’t like to apologize, because that would mean admitting she was wrong. She also likes to be in control – which is why she fired her last PR team. Now she has no choice but to listen to whatever voices of reason are around her because quite frankly her career hinges on her being able to resurrect her image and make herself seem likable, or at least tolerable. Her last two albums failed miserably and she is currently without a record label.

She is not the commercial success that she once was, and because she is no longer a sure thing she needs to prove to potential record labels that she can be popular and win back public favor. Good luck with that Ms.Rimes – you block people on your Twitter by the dozens daily even if they don’t tweet you directly or follow you and these are potential fans – the people who buy albums and concert tickets. You get that … right!?!

She has been listening – at least in some capacity – to the people around her telling her to put her phone down and step away from the Twitter because her tweets have been more subdued. And by subdued I mean she is tweeting less, she hasn’t called Brandi a witch or some other horrible name in a few weeks, and isn’t up late talking about her sex life with her fans (yes she has done this).

But you know that they say… old habits die hard and Saturday LeAnn was back to being LeAnn, which means being totally inappropriate and insensitive – to her favorite victim, Brandi Glanville. It started when @AllBoutTRH posted a link to an article that was about how despite the fact that Brandi has been vocal about the pain she feels everytime she has to say goodbye to Mason and Jake when it is their father’s days to have them – a pain made worse on the holidays – LeAnn went and rubbed it in her face by posting a picture of her, Eddie, and the boys and wrote, “Thanksgiving wishes from our blended family to yours. So much love and peace” (*puke*). @Wlft1 wrote that it was, “…Double the family, double the love.” And in true LeAnn fashion she responded in poor taste WITH Brandi tagged into the tweet by joking that the boys having a broken home was like a, “double mint commercial lol.” There is nothing funny about a broken home LeAnn. Now go sit in a corner and think about what you have done. Dealing with a nasty piece of work like you LeAnn is like dealing with the Bad Seed given access to a Twitter account. Anyways here it is: 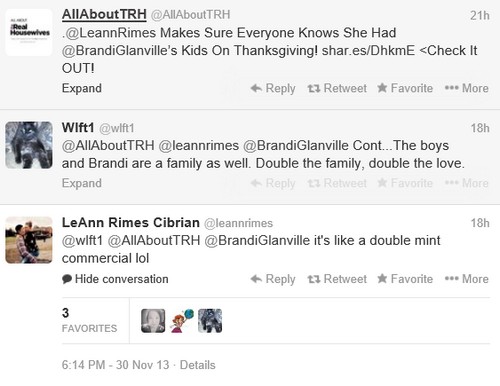 Others who saw this exchange criticized LeAnn for gaffe number # – what number are we at now, I have lost count. Here are a few responses from some of LeAnns’ admirers:

@NoSensitivityxo wtf? Why reply to this leann?! You are cracked

@1970Rachael why r u tweeting brandi, u equate her losing her kids half time to “double mint commerical”

@FizzyCuteness wow. ms.Rimes this was unnecessary & so wrong. dont u have a heart. Just wow

LeAnn of course has not apologized for making light of Brandi’s pain and also her stepsons’ pain – because the truth of the matter is that divorce is so very hard on children. So in reality her joke and laughter that Mason and Jake having two homes is like a “double mint commercial” and oh so hilarious, was not just an insult to Brandi but to her stepsons as well. Just another bonus fail from the self-proclaimed bonus mom.

This is not the first time that LeAnn jokes – or what she finds funny – has landed her in hot water. She has also joked about being a homewrecker, a child stealer, and just last week laughed when someone joked that her ex-husband Dean Sheremet was gay. She hasn’t apologized for any of these things either. And don’t hold your breath because she won’t. Listen LeAnn, it is not rocket science, or even grade 9,  when you make a joke and people go WTF and not LOL it means it wasn’t funny and problem in poor taste *facepalm*. You my dear have a twisted sense of humor.

And in other LeAnn news… there are still a lot of questions about the authenticity of the number of followers on her Twitter account. Basically it seems like LeAnn doesn’t just make fake accounts but buys them as well. RadarOnline previously reported that in April of this year in the matter of one day her followers increased by 50,000. By the next month her followers had increased by 100,000 and many of those followers appeared to be fake egg accounts. According to an article on tubefilter there are a number of companies that sell fake followers – like Duvami which, “claims they can add thousands of Twitter followers to a client. For just $42 a person can purchase five-thousand twitter followers within 3-7 days.” If you look at this graphical analysis of LeAnn’s Twitter followers – courtesy of the site socialbakers – the huge jump in followers from the 27th to the 28th seems to indicate she is back to her old tricks of buying Twitter followers: 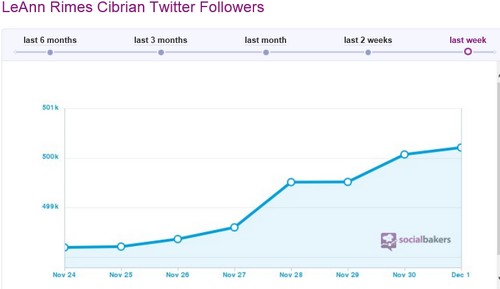 It is speculated that LeAnn buys followers in an attempt to stay ahead of Brandi’s number of followers – since despite LeAnn being in the public eye for almost 20 years now and Brandi for only 4 years they have roughly an equal number of followers. This cannot sit well with LeAnn who considers herself the bigger star.

I cannot say conclusively if LeAnn buys follower or not – but let me put it this way – she has 500K followers and like 11,000 people bought her last album. If – and that is a big if – these followers are real then they obviously aren’t fans or Spitfire would have been a success. That much is clear.