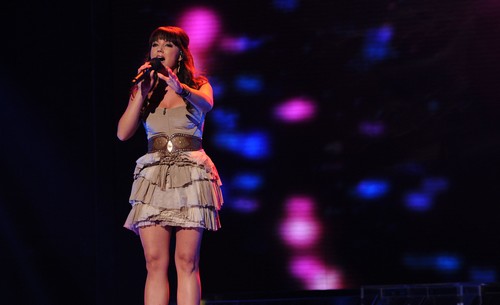 Rachel Potter took the stage tonight on THE X FACTOR USA for the live performance shows. Rachel sang “Alone” by Heart. Rachel is on Kelly Rowland’s Over 25s team and they decided to sing this song for her 1980s choice.  On tonight’s show the top 12 performed live in front of coaches Simon Cowell, Kelly Rowland, Demi Lovato and Paulina Rubio for America’s vote and to make it another week. Did you watch tonight’s performance show? We did and we recapped it here for you.

Judges comments:  Paulina said, “Wow, you are such a great singer, after this performance you can show everyone you are an entertainer.”  Demi said, “OMG, you make me so proud each week.  You were phenomenal.”  Simon said, “Thank God you had a proper song this week.  The big note it sounded like you were screaming.”  Kelly said, “There is nothing wrong with having edge.”

Because of a computer glitch the artists were required to perform twice last week.  For Rachel’s “Save Me” song she sang “Anyway” and Kelly said,“that’s what she is supposed to do; she just completely killed that song.”   After she sang Simon asked if she has a twin sister but believes that tonight she sang much better than she did last night and is incredible impressed. Kelly says she is proud of her and that people need to vote for her.   If you want to see Rachel Potter make it another week, you have to vote for her.