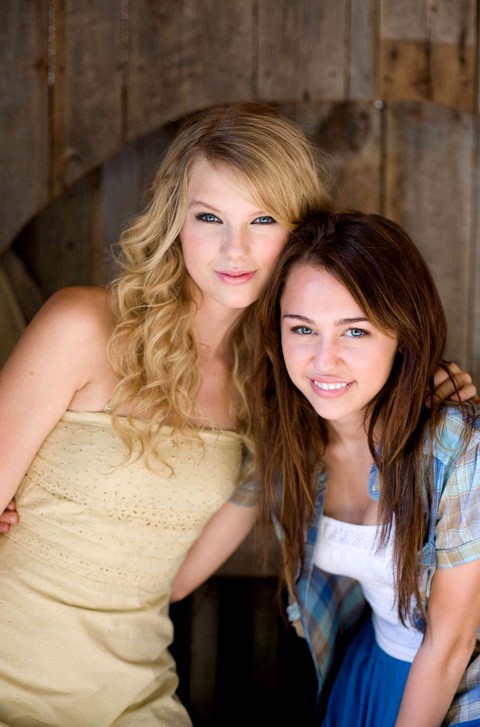 It’s been a long time since we’ve seen Taylor Swift and Miley Cyrus together. I always chalked it up to busy work schedules, but it sounds like there may be more to the distance than business! A new report claims that Taylor decided to cut all ties with Miley after realizing that strippers were only the beginning of the former Disney star’s wild new life.

A source reported to National Enquirer, print edition January 21, 2013, “Taylor refuses to hang out with Miley anymore. She’s telling friends there’s no place in her life for Miley and her crazy antics.” In the past few years, Miley’s career has changed. She’s hosted SNL, been involved in a salvia drug scandal, got engaged, and now considers leather and strippers to be ingredients in the perfect night out.

Good girl Taylor isn’t having any of it. “She’s so worried that Miley is a loose cannon that she decided to make a clean break. She did it without any explanation to avoid any kind of scandalous confrontation.” I wonder if we could find it in one of her songs! I haven’t listened to all of her new album Red yet, any ideas? Taylor lets it all out through music, so there’s got to be a clue somewhere.

Don’t think Miley is playing victim in all of this though! The source claims that “Miley is furious. She’s trashing Taylor as a back-stabbing fake.” I can’t attest to the backstabbing, but Taylor is fake, for sure! The girl plays demure quirky housewife, but is dating a new guy every month, then blasting them in song, refusing to ever take responsibility for relationship failures!

In fact, Miley has been with the same guy for three years, while Taylor’s had at least five boyfriends, none of whom ever made it to the 4-month anniversary mark! Taylor may not party publicly, but at least she isn’t lying about who she is to protect her music brand. Do you think they’ll ever reconcile?