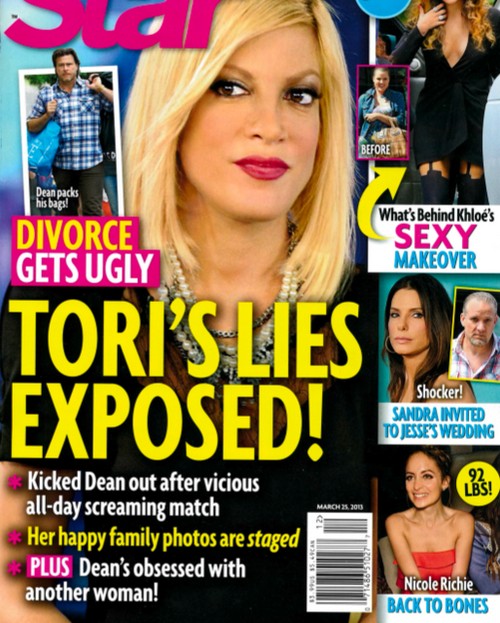 It appears that things between Tori Spelling and Dean McDermott are no closer to being resolved than they previously were. Just last week, Star magazine claimed that the two were embroiled in a bitter divorce battle. Now, it’s getting worse!

The tabloid claimed last week that Tori and Dean were going through a $300 million divorce and that Dean was going after Candy Spelling’s money, as well. It’s not like he could really get his hands on it, but it was worth a shot, we’re guessing?

According to the latest issue of the magazine, Tori’s lies have been exposed! Reportedly, she kicked Dean out of her house after they spent all day screaming at one another. In addition, the tabloid claims that all of their happy family photos are actually staged. Lastly, Dean is said to be obsessed with another woman!

We’re not sure how much of this we’re buying, but in Hollywood, anything can happen right? What do you think of the divorce rumors? Surely no celebrity comes right out and says anything until the day the papers are filed with the court. So we’ll just have to wait and see! Stay tuned for details on this story as they are made available!