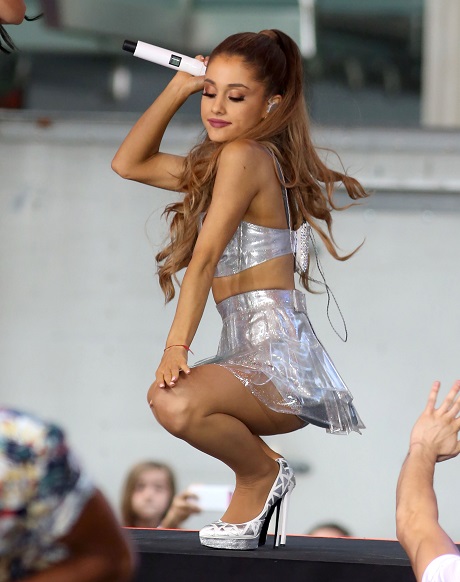 Seriously, what is with all the new craze over Ariana Grande? People are calling her the new Mariah Carey, but the girl’s only 21 years old and already has an ego the size of a country. Oh, wait, on second thought, she’s totally the new Mariah Carey.

Star Magazine has a long exclusive about how horrible Ariana is, including a detailed anecdote from Ariana filming a TV special in August. Star’s source explained, “She was a total nightmare. She demanded to be shot only on her left side and told the lighting crew that if they used red light, she would ‘kill herself’. She arrived hours late, with no explanation, and refused to do anything the photographer asked. She was acting like a crazy person….”

Apparently, the producers on scene are saying that she’s one of the worst people they have ever worked with, which says a LOT. When producers – any producers – in Hollywood say that you’re difficult to work with, that means that you’re probably unbearable in real life. In Hollywood, difficult is the norm, so if you’re so horrible that you actually stand out to a couple of jaded producers, then you know it’s really bad.

But wait, her diva behavior isn’t even the end of the story. Apparently, Ariana also has a complex about being compared to Mariah Carey, even though Mariah is ten times more famous than her and more talented than her. Ariana thinks Mariah dissed her in an interview, and she doesn’t want Mariah’s name ‘brought up in her presence’. Basically, Mariah just refused to praise Ariana when she was asked about her a long time ago, and instead gave some generic answer saying, “I wish everybody all the best of luck and if this is the career path they choose, hope that they can achieve longevity.”

In Mariah speak, that’s basically her saying, ‘Ariana who?’ And, of course, Ariana’s ego wouldn’t let her handle that, and she’s now making Mariah a persona-non-grata in her presence.

Someone should probably tell Ariana that this kind of behavior isn’t sustainable unless you’re already a household name, which Ariana is far from being. Does she want to end up as the Katherine Heigl of the music industry? If not, she better start watching what she says and how she acts.