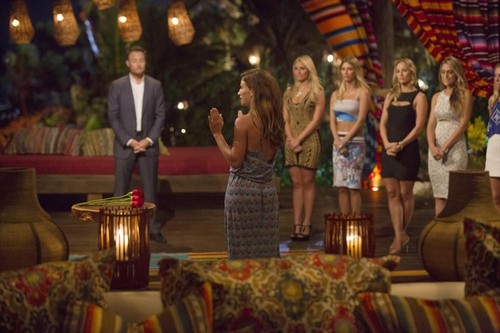 ABC’s newest reality TV show Bachelor In Paradise is officially under way and Episode 2 is set to air on Monday August 11th. The series kicked off with a slew of Bachelor and Bachelorette alums headed to a resort in Mexico for a second chance at love. Every week men or women are sent away from the island if they haven’t made a connection, and new players arrive. Episode 1 results are available by clicking here.

According to Bachelor in Paradise spoilers, Chris Bukowski will arrive in Mexico on the August 11th episode. Elise Mosca immediately hit it off with one of Andi Dorfman’s castaways, Dylan Pettit. However spoilers tease that when Chris Bukowski arrives at the resort, Elise is immediately drawn to him and cheats on Dylan with Chris in the ocean. Dylan naturally is upset and at the rose ceremony he refuses to accept Elise’s rose, and ends up going home.

While Elise is making a mockery of Dylan, some major drama goes down with the other Bachelor in Paradise stars when Marcus discovers a love letter in Ben’s suitcase and reveals that he actually has a girlfriend back home. After being called out Ben willingly leaves the show and heads home to his girlfriend, and of course breaks a few hearts on his way out.

Michelle Kujawa announced during the series premiere that she “maybe found love” and had no interest participating in Bachelor in Paradise. But, according to Reality Steve’s spoilers, on the August 11th episode it is revealed that the reason Michelle didn’t want to date anyone on Bachelor in Paradise is because she was already hooking up with one of the camera guys. When Chris Harrison heads to the hotel to confront Michelle about her departure, the camera guy jumps off Michelle’s second floor balcony and breaks both of his legs and is rushed to the hospital.