Beyonce Divorce: Tells Jay-Z “It’s Over” – Cheating Affairs Too Much To Handle (PHOTO) 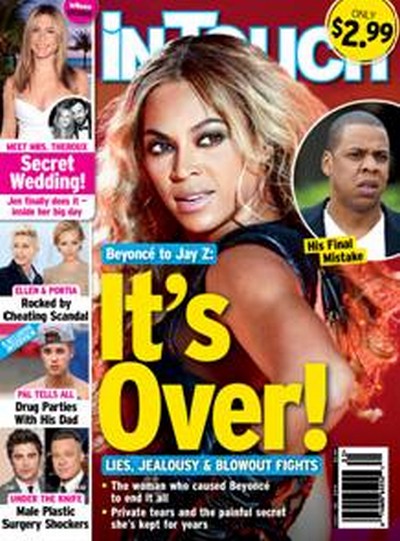 Beyonce‘s divorce from Jay-Z was inevitable, especially with the way recent events have taken shape. The minute that Solange‘s attack on Jay-Z went viral, Beyonce’s perfect marriage to Jay-Z came crumbling down, and with it, the image they had cultivated over all these years. Sure, there may have been rumors in the past about Jay-Z’s affairs and their open marriage, but nobody ever took the rumors seriously – until Jay-Z was caught flirting with Rachel Roy at the MET Gala afterparty, in full view of his sister-in-law and the hundreds of other guests present.

The latest of In Touch Weekly suggests that Beyonce has had enough with pretending that everything’s sunshine and rainbows, and sources claim that Jay-Z’s affairs have led to too many fights for them to recover. Understandably, if they did have an open marriage, then Beyonce kept her shit locked tight whereas Jay-Z has clearly been much less discrete in his dalliances. And when you betray Beyonce, you’re in trouble – even if you are her husband.

See, Jay-Z could have continued having affairs for as long as he wanted. Goodness knows, the rumors of him hooking up with the likes of Rita Ora and Rihanna have been around for long enough. But when he starts to do in public and in full view of the media and other industry types, he’s crossing a line. I don’t blame Solange for wailing on him, especially since she was just looking out for her sister. But open marriages always come back to bite couples in the ass, and this is a perfect example of that.

I know Beyonce probably doesn’t like to admit defeat by getting a divorce, but she should think of this as yet another way to boost her public image. She can re-imagine herself as the vindicated wife, removed from her cheating husband and out to conquer the world on her own.