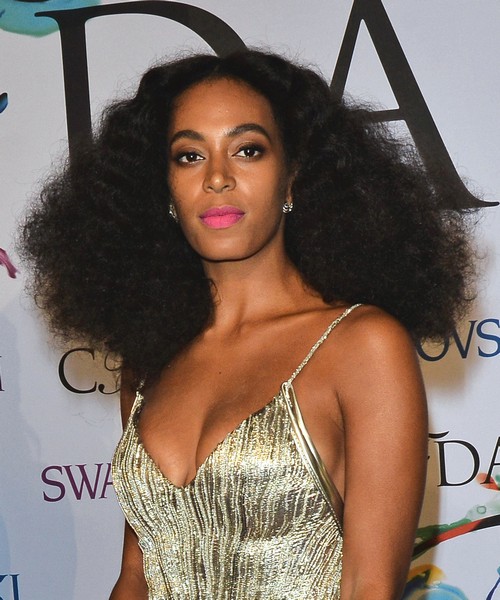 Solange has been in the news a lot recently, all thanks to her impromptu attack on Jay-Z at the MET Gala afterparty last month. Since the video of the attack went public and started rampant speculation on Solange’s reasons for hitting her brother-in-law, Solange has gone radio silent. She’s surfaced here and there, but she’s mostly stayed quiet on the whole situation. Unfortunately, the media hasn’t stayed as quiet, reporting that the situation seems to have arisen after Solange witnessed Jay-Z flirting with Rachel Roy, a.k.a. indirectly cheating on her sister, Beyonce. Then there is also the Mya cheating accusations and the list goes on and on. Even if Beyonce and Jay-Z have an open marriage there has to be a limit, right? And what about those rumors that Beyonce was/is pregnant?

However, perhaps she realized that if she didn’t speak up now, nobody would ever ask her about anything else? Thus, as part of her cover interview with Lucky Magazine, Solange hesitantly opens up about the Jay-Z attack. Well, she barely says anything about it, but she acknowledges the attack as ‘that thing’.

She then states, “What’s important is that my family and I are all good. What we had to say collectively was in the statement that we put out, and we all feel at peace with that.”

When the video initially leaked, Solange, Beyonce, and Jay-Z all released a statement about how they were working through everything as a family. But clearly, the public version of this drama didn’t reflect the private version – or Solange is just lying and trying to save face. She’s gotta be embarrassed about how the whole world saw her losing control, and now she has to deal with the aftermath. Granted, she claims that she and her family are ‘good’, but she doesn’t say anything Beyonce and Jay-Z. This could have been a perfect time for her to clear up all those divorce rumors, especially since most of them started because of her attack in the first place. But instead of even mentioning Jay-Z’s and Beyonce’s relationship, she’s just falling back on her old statement.