The Bold and the Beautiful Spoilers May: Hope Juggles Liam and Wyatt – Quinn Interferes – Brooke and Bill Head To Dubai

BY Amanda Austin on May 2, 2014 | Comments: 4 comments
Related : Soap Opera, Spoiler, Television, The Bold and the Beautiful 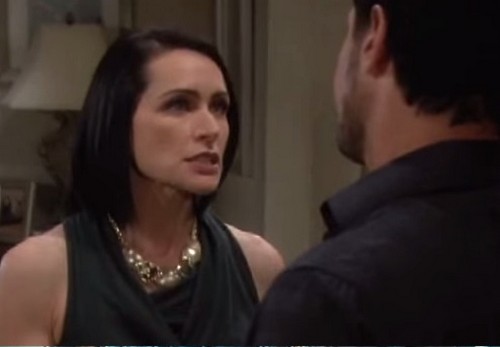 Quinn will become a huge thorn in Bill Spencer’s side during the month of May on Bold and the Beautiful. The scheming mother of Wyatt threatens to expose her tryst with Bill to Brooke if he doesn’t fulfill her wishes and make their son Wyatt his legitimate son. Quinn wants Wyatt to have every advantage that his half-brother Liam receives because of his bloodline. In an effort to get Brooke away from Quinn, Bill surprises her with a glamorous and romantic trip to Dubai.

Bold and the Beautiful spoilers also tease an epic battle developing between Ridge and Bill, over their sons. Katie has put her foot down when it comes to baby Will’s custody arrangements, however Ridge gets the receiving end of the stick when Brooke dishes out the same treatment to him over their son. Both men are floored that each other will be spending more times with their sons than they are permitted to.

The love triangle between Hope, Liam, and Wyatt will continue through the month of May and produce some serious drama for B&B fan while Hope dates both brothers. Of course Wyatt’s Mom Quinn can’t help but interfere and try to spin the circumstances to turn out in Wyatt’s favor.

Also during the month of May Bold and the Beautiful spoilers tease a showdown between Aly Forrester and her mother Darla’s killer Taylor. Aly was finally appearing to get her mental health in check, but coming face to face with Taylor who arrives with big news could potentially cause the young teen to become unhinged again. Meanwhile Oliver will stand by Aly’s side, but the question of how genuine his feelings for Aly are will continue to arise.

How do you feel about all of the love triangles on Bold and the Beautiful this month? Do you think that Hope should choose Liam or Wyatt? What do you think Taylor’s “big news” is? And, how do you think Aly will respond to her being back in town? Share your thoughts and theories in the comment section below.

People feel strongly about Brooke’s antics and the Hope – Wyatt – Liam love triangle in general – check out a couple of the fan reactions on Soap Opera Spy:

i am so very sick of this triangle hope/wyatt/liam – everybody is all over quinn interfering but look at the crap bill pulled when the triangle was hope/liam/steffy…………….

One thing for sure – according to the spoilers we see this triangle drama is far from over….