The Bold and the Beautiful Spoilers: Liam and Hope Marriage and Wedding in Monaco or Do Brooke and Ridge Marry Instead? 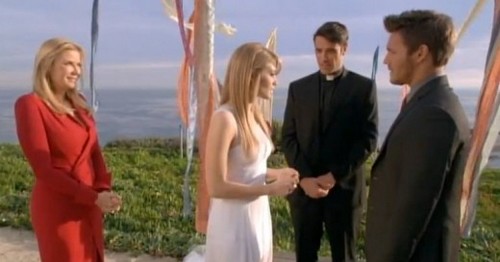 Weddings on CBS’s daytime drama Bold and the Beautiful seem to be cursed. For some reason, no one can get through a ceremony these days.  First, Brooke tried to tie the knot with Ridge, and her sister Katie passed out moments before they finished their “I Dos” and successfully thwarted their nuptials.  A few months later, Brooke and Bill headed to Abu Dhabi to get married. One would think travelling halfway across the world would reduce their chances of interruptions, but that wasn’t the case.  Ridge paid a huge price, possibly his life, but he was able to stop their wedding ceremony on the beach.

You would think the characters on Bold and the Beautiful would just give up already, but according to B&B spoilers in the June 23rd edition of Soaps In Depth, Liam and Hope will be considering getting married in a few months.  Executive producer Bradley Bell also announced that this week they are shooting a wedding in Monaco.  The characters shooting in Monaco include Wyatt, Liam, Ridge, Brooke, and Hope.  So, perhaps Liam and Hope do more than just discuss marriage, and they actually go through with the nuptials.  Why would Wyatt be on site though? Does he try to stop the wedding just like Ridge did in Abu Dhabi?

We also can’t help but notice that Bill and Katie aren’t shooting in Monaco, but Ridge and Brooke are.  Does that mean that after Ridge is rescued from his dip in the Persian Gulf, he and Brooke get back together?  What if the wedding in Monaco is actually Brooke and Ridge trying to say their “I Dos” again, and Liam just brought both of her boyfriends along with her to watch her Mom get married?  On the bright side, the fact that Ridge is heading to a wedding in Monaco means that he isn’t dead!

What do you think, Bold and the Beautiful fans?  Which B&B couple will be trying to tie the knot next?  Is there a chance that Brooke and Ridge get back together after his near death experience?  Or do you think it is Liam and Hope that attempt to get married this time?  Share your thoughts and theories in the comments below and don’t forget to check CDL for all of your Bold and the Beautiful spoilers.

People at Soap Opera Spy have opinions on the romantic situation on Bold and Beautiful:

I don’t know but I’m so tired of the back and forth with Hope/Liam/Wyatt & the stopping of weddings, that’s all that’s been going on for a couple years now. Getting old.

Getting so tired of this. I bet Hope is going to have an accident driving back after she breaks up with Wyatt or Wyatt will kidnap her. Maybe she will not break-up with Wyatt. Good Grief!! Why doesn’t anybody ever elope in the soaps. Oh, forgot, I guess Bill tried to do that with Brook.

hope plans ANOTHER wedding????? why do the soap gawds put us through this????

Hope Is An Idiot!!

Another Hope/Liam marriage is not something that I want to see. It’s been done over & over. Enough already. Please let them each meet someone else. Quinn at least keeps the show interesting. Steffy use to do that but I don’t think that she’s coming back. I’ve been seeing her in movies. So it’s FF on Hope/Liam for me. Agreed that Ridge looks like he needs a bath. Is he using?

I reckon it is a Lope wedding that Wyatt will try to stop, and also Brooke/Ridge have reunited (why Ridge is there with Brooke)

It doesn’t look like this new marriage possibility is generating too much excitement amongst fans – let’s see how things work out.