Days of Our Lives Spoilers: Daniel and Kristen Work To Take Down Theresa – They Know She Hit John and Framed Brady 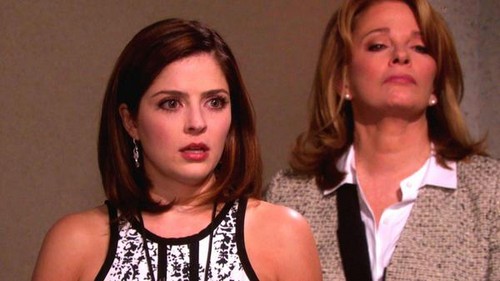 Days of Our Lives spoilers reveal there will be an unlikely partnership popping up this week on the NBC soap opera. It’s no secret that there is some bad blood between Daniel and Kristen DiMera. After all, the woman kidnapped him and held him hostage! And he returned the favor by kidnapping her and handing her over to the police. It’s safe to say they are the last two people we’d expect in Salem to join forces.

However, according to an all new DOOL spoiler video, it looks like that is exactly what will happen during the week of October 6th. Days of Our Lives spoilers are teasing that John Black is awake from his coma and recently remembered that Theresa Donovan is the person responsible for hitting him over the head and putting him in a coma. On the Tuesday, September 7th episode of Days of Our Lives, John called Kristen into his hospital room and announced he wanted to bury the hatchet and make amends with her, after all of the hell she has put his family through.

Either John and Marlena are up to something and trying to get Kristen right where they want her, or else John is not thinking clearly since his coma. Does this mean that John is going to miraculously forgive Theresa too?

Well, even if John does forgive Theresa, she is still going to have to answer to Daniel and Kristen. The unlikely duo has put two and two together and figured out that Theresa is responsible for John’s coma, and they plan to make her pay for it whether John wants revenge or not. In an all new Days of Our Lives spoiler video, Daniel confesses to Kristen that she has been right all along and he thinks Theresa is the one that hit john, and then she framed Brady. In the spoiler video, Kristen says they should work together and “take down that little dirt bag.”

So, Days fans, why do you think John forgave Kristen? Is he up to something, or just turning over a new leaf after his second lease on life? What do you think Kristen and Daniel will do to “take down” Theresa? Let us know what you think in the comments below and don’t forget to check CDL tomorrow for more Days of Our Lives spoilers.