Days of Our Lives Spoilers: Is EJ Still Alive – Who is Sami’s Surprise Visitor – Jennifer Catches Daniel With Kristen 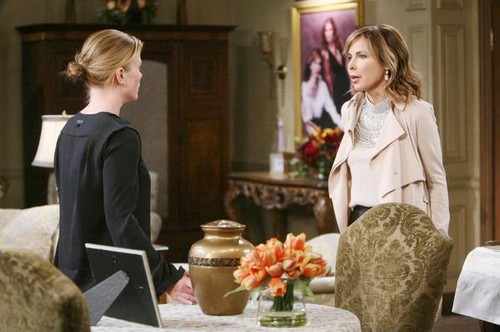 Days of Our Lives spoilers have been teasing EJ DiMera’s death on the NBC soap opera for months now, now that James Scott’s character has been killed off, spoilers for DOOL during the week of October 20-24 tease that there may be a twist involving his death. After EJ was shot and killed Stefano sent Kristen DiMera to the morgue to inject something out of a needle in to EJ’s dead body. Then, Stefano stole his body from the morgue and had an urn full of someone else’s cremations sent to Sami Brady. Days of Our Lives spoilers tease that during the week of October 20 Sami receives a life-altering visit from an unexpected guest. We can’t help but wonder if said visitor has something to do with EJ’s death, or perhaps might even be EJ himself?

Days of Our Lives spoilers for the week of October 20 – 24 reveal that there will be trouble in paradise at Will and Sonny’s apartment. The couple finds themselves feuding again over Will’s latest newspaper article on Chad DiMera. DOOL spoilers reveal that by the end of the week Sonny says some pretty hateful things that he might not be able to take back.

Will and Sonny are not the only Salem couple experiencing a setback during the week of October 20. DOOL spoilers reveal that any chances of Daniel and Jennifer reconciling are sent in to a tailspin when she catches Daniel in Kristen’s hotel room and assumes the worst. Meanwhile, Kristen will be too busy to realize she is ruining Jenn and Dan’s relationship, because she will spend the week trying to win back Brady Black. DOOL spoilers also tease that fans can expect to see Eve and Jordan’s pasts come back to bite them during the week of October 20.

So, DOOL fans who do you think Sami’s surprising visitor is, do you believe that rumors that EJ DiMera might still be alive? Why do you think Sonny is so upset with Will? Do you want Daniel and Jennifer to get back together, what about Kristen and Brady? Let us know what you think in the comments below and don’t forget to check CDL tomorrow for more Days of Our Lives spoilers.