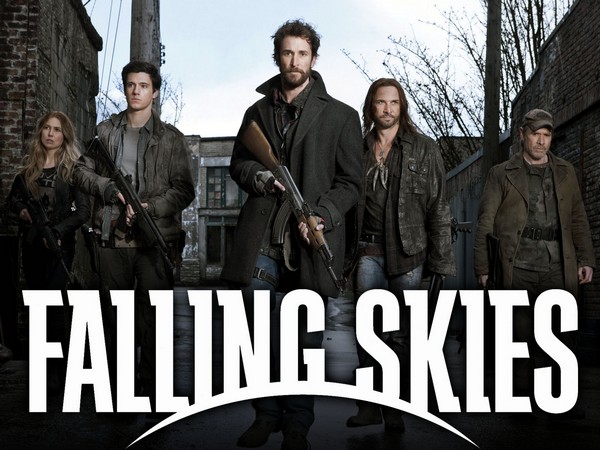 Falling Skies returns tonight on TNT with a new episode at 9PM EST called “The Eyes”. On tonight’s episode, Tom faces an impossible decision when the Espheni plan is revealed to him. Meanwhile, Weaver and Pope seek the great escape from the Espheni prison; Matt tries to hide his true allegiance; and Anne searches for her daughter.

On the last episode on the outskirts of Charleston, just steps away from perceived safety, The Mason Clan and the remaining 2nd Mass suddenly found themselves under brutal attack by a new Espheni war machine – and a new, deadly creation unlike anything previously encountered. Divided like chattel and spread to the winds, The Masons to each forge new relationships and abilities to survive. Treva Etienne guest-stars. Did you watch the last episode? If you missed it we have a full and detailed recap, right here for you.

On tonight’s episode the Espheni reveal their new plan to Tom, and he is faced with an impossible decision. Meanwhile, Weaver and Pope investigate a way out of the Espheni prison, while Matt struggles to hide his true allegiance from the “Team Leaders” at the Espheni Youth Camp. Elsewhere, Anne leads an exhausting search for her daughter Lexi, while Ben’s concerns about Lexi’s increasing powers uncovers a devastating secret she’s been keeping. Treva Etienne and Robert Sean Leonard guest-star.

Tonight’s second episode of season four of Falling Skies is going to be great. You’re not going to want to miss a minute of the action and we’ll be recapping it live for you as well. While you’re waiting for the episode to begin hit up the comments and tell us your thoughts about the show.

Tom aka “the Ghost” was always planning on leading the rebellion against the Skinners but he had a timeline. And nothing was to begin this soon. Then again he also never assumed someone would borrow his secret persona. There’s a second “Ghost” going around impersonating him. It was probably done as a way of inspiring hope to people fighting every day for survival. Yet this person only pretending to be the Ghost took it one step further by attacking one of the flying creatures. In all fairness he did that to protect a young mother and her baby though it doesn’t change the fact that Tom was forced to step in and kill this creature.

That came with a price!

Tom killed the alien and the Skinners weren’t all that enthused about this new attitude coming from the humans. The Skinners released him and Weaver from solitary so that they could hear among the rest of the prisoners the Skinners’ newest demands. The Aliens want The Ghost to be handed over to them and in return the prisoners will be one again fed on rotation. But in the meantime they’ll starve. And if they dare to help the Ghost then the executions will soon begin.

None of Tom’s people want him to sacrifice himself although there aren’t a lot of options to escape the camp. Luckily Hal had made some new friends during his father’s incarceration. Dingaan Botha knows a few things about the electrical fence surrounding them and with his help they might be able to escape with relative ease.

Plus they know they have friends on the outside. Cochise got word to Tom that he might have found Matt not far from the camp. He mentioned he saw the Espheni bring children there so as a favor to Tom he’s going to lead his people in a breakout. And who knows he might run into Anne.

Since losing her daughter she’s become obsessed with tracking down Lexi. As far as she knows her daughter is still a child and that’s why she figured her Lexi would be at one of these holding places. So now she’s pushing the 2nd Mass far beyond their means to get one of these facilities. They hardly stop long enough to sleep much less eat and she’s taken to interrogating captured Skinners with torture. This Anne as never seen before.

She’s doing this to herself and it’s regrettably all for nothing. Her daughter is perfectly safe running a cult on the outskirts of the city.

Lexi’s people love her so much that they don’t even want to share her with the non-believers. Lourdes has built up a following around Lexi and she refuses to let anyone take that power away from her so she make sure to limit who gets to see Lexi. Though she shouldn’t have tried that with Ben. Ben knows something is wrong with the way Lexi keeps aging and he wants to stop it before something bad happens to Lexi.

And after finding a way around her bulldog he induced Lexi into getting tested. Roger could find a way to help her but that’s only can be possible if he gets a sample of her blood. Yet moments after he received it Lourdes tried to destroy the sample. She didn’t want what Lexi really was coming in case it destroyed the illusion she created.

The fight between Lourdes and Ben caused so much friction that Lexi had an “episode” and her powers grew uncontrollable. She ended up destroying her own blood sample. Afterwards she was so tired out that she instantly fell asleep. Which gave Ben time alone with Maggie.

Ben, Maggie, and Roger want to save Lexi even if that means from herself. So they’re going to cut Lourdes out of the picture. However Lourdes isn’t the biggest threat to Lexi. Lexi knows where she got her powers from and she went back to the source to ask for them to be taken away. It was the Espheni that gifted her. And only the Espheni can take her powers away.

Not only have the Espheni built a false paradise with Lexi they’ve also brainwashed kids to turn in their own parents at those special school. So they’re planning on something and Tom was given a hint as to what.

He did turn himself in as The Ghost. But he wasn’t killed or forced to stay on the Mothership for long. Because you see they wanted his compliance. In return for peace among the humans – Tom had to promise there wouldn’t be any more riots or resistance. And he agreed fully knowing that he wasn’t going to honor that promise.

While he was up on that ship, Tom realized how they could escape and so he’s going to break everyone out just like he originally planned.

The Espheni said they were preparing the planet for war with a scarier race coming their way but Tom is willing to risk fighting the new race without anyone’s assistance. If the Espheni went to this length to prepare for war, then Tom wants to meet the enemy of his enemy in case he might find a new alliance.