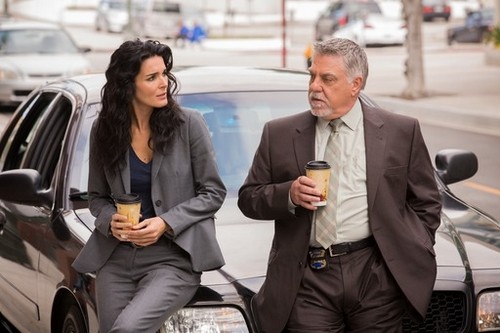 Tonight on TNT RIZZOLI & ISLES returns for another episode in its fifth season called, “…Goodbye.”  On tonight’ episode a traumatized, blood-covered woman arrives at the station, claiming she killed someone but forgetting the identity of the victim. Elsewhere, the team mourns the loss of a friend and colleague.

On the last episode  solving the murder of a jogger took on even greater urgency when Jane realized that the motive was theft… of the woman’s baby. As the investigation went underway, Jane attempted to hide her pregnancy from her snooping mother, and Maura and Frankie faced the aftermath of their kiss. Did you watch the last episode?  If you missed it we have a full and detailed recap, right here for you.

On tonight’s episode a woman walks into the station covered in blood, carrying a gun, and saying she killed someone. Unfortunately, the trauma of what she did caused her to forget who she is or who the victim is. The team tries to unravel this bizarre case as they deal with the loss of close friend and colleague, Det. Barry Frost.

This episode of Rizzoli and Isles shows the aftermath of Barry’s death and how it’s affecting his friends and family. Trying to cope with the pain the best she can, Jane tries to distract herself with work. Barry’s grieving mother comes into the station crying. She is struggling with planning Barry’s funeral service. Jane offers the team’s help to arrange the service.

A bloody girl comes into the station with a gun. She claims that she killed someone. The girl can’t remember anything, not even her own name. Maura does a physical examination of the unknown girl whom she names “Jessica Doe.” Maura chats with the girl to try to jog her memory but she only becomes emotional. Maura believes that the girl may have blocked out all information that is related to a traumatic event that happened to her.

Jane and Vince take the girl on a tour of Indian restaurants around the city to help her remember. The car ride helps the girl realize that she was a school teacher. This experience also brings back some memories for Jane as her grief catches up with her. Jane sees what she believes to be Barry standing on the side of the street. After reacting frantically, she realizes that it was just her imagination.

After some late nights investigating the case of Jessica Doe, Frankie identifies the woman as Lily Green, a private preschool teacher. Before communicating with Lily further, the team decides to search Lily’s home. They find nothing but phone records between Lily and a man named Toby Warren. This leads them to a warehouse where they find a dead Toby Warren lying in his own blood and pierced with a gunshot wound.

Upon informing Lily of what they found, she finally recalls what happened to her. She says Toby was involved with selling drugs and his dealer was after him for stealing money. Lily was there when Toby was killed. With her help, the team catches the dealer who killed Toby and Lily is reunited with her family.

At Barry’s funeral, Jane gives the eulogy for her dear friend. She spoke of her memories of him and how it can never be taken from her. Arriving home, Jane finds a postcard Barry had sent to her from San Diego. On the postcard Barry writes, “Couldn’t be better here, but I miss you anyway.” Jane finally gives herself time to grieve.