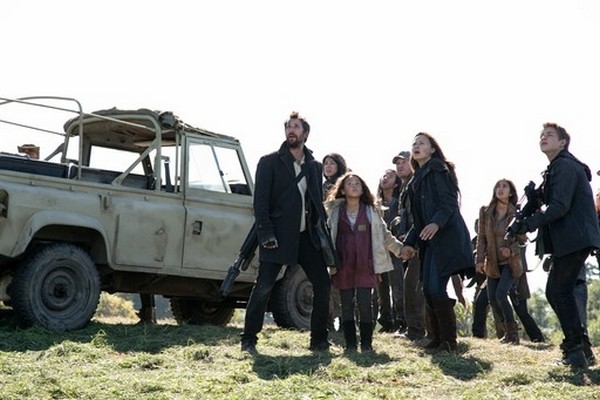 Falling Skies returns tonight on TNT with its fourth season premiere episode at 9PM EST called “Ghost In The Machine”. On tonight’s episode, season 4 begins with the Masons and the 2nd Mass under brutal attack by a new Espheni war machine and a menacing creation. Before long, the Masons must each establish new relationships and survival techniques.

On the last season finale when the 2nd mass destroyed a crucial Espheni base, a relentless enemy was taken down and the Mason family was reunited with those who had been lost. But the arrival of more interstellar players put the fate of the Earth’s remaining survivors in doubt. Robert Sean Leonard guest starred.

On tonight’s episode on the outskirts of Charleston, just steps away from perceived safety, The Mason Clan and the remaining 2nd Mass suddenly find themselves under brutal attack by a new Espheni war machine – and a new, deadly creation unlike anything previously encountered. Divided like chattel and spread to the winds, The Masons must each forge new relationships and abilities to survive. Treva Etienne guest-stars.

Tonight’s fourth season premiere episode of Falling Skies is going to be great. You’re not going to want to miss a minute of the action and we’ll be recapping it live for you as well. While you’re waiting for the episode to begin hit up the comments and tell us your thoughts about the show. In the meantime, enjoy a sneak peek preview of tonight’s episode below.

The gang finally made it back to Charleston and just like the case with Moses the too learned the Promise Land was not meant for them!

They were attacked near the outskirts of the city by a new force they’ve never seen before. In amidst battle, not only was the remaining 2nd Mass left almost depleted if not scattered but the Mason family were also forcibly separated. Fast-forward four months later and Tom finds himself in a concentration camp manned by the Skitters and a new and flying alien race. Yet the overlords have stayed the same regardless of the massive air strike from last season. The Espheni are back in charge and their hated nemesis the Volm are nowhere to be found. As for this new race, they occasionally come down to the camp from their airship to steal a human here and there.

No one knows why or if the people that were take are even still alive. Though Weaver can hope. His daughter was taken from him and when he tried to fight back he was then put into solitary alongside Tom. Which had the aliens been smarter – they would have realized that Tom and Weaver worker better together. It’s like really after all this time you still don’t know a thing about the rebels!

Tom isn’t lying down and his taking imprisonment lightly. He’s concocting plans to escape and the only reason he hasn’t done that by now is because he’s not selfish. If he leaves then he’s going to be taking everyone else with him!
Mostly the aliens leave the humans to fend for themselves inside of the camp. There are the occasional food drop to feed their prisoners. And so they are also people like John who no matter where they end up will try to take advantage of the situation. He and his people have begun to hoard the food. But there are certain few that try to stop them like Hal and a mystery man roaming the area.

Then there are the others outside of the camp. Anne and Anthony had escaped the massacre and now they’re left as one of the last fighting forces outside of the enclosed fence. They’ve recruited new men and they’re desperately scavenging the area for any sign for the ones they’ve lost. So far though they’ve only found a truck filled of kids.

The kids were getting transferred into Espheni’s territory although Anne didn’t know why seeing as none of them were harnessed. Matt on the other hand knows the answer. He along with other children were taken in and sent to a “special” school. Apparently the Espheni no longer want to control human children by using the parasitic Harnesses. Instead of mind control they want to use propaganda and carefully crafted Stockholm Syndrome to manipulate these children into accepting their control somewhat willing.

The kids are fed as a reward o taking to the new doctrine nicely and when they fight – they’re punished. But the Mason inside of the school is just like his dad. He sees that prison for exactly what is. And that’s why he’s also planning liberation. Matt has convinced some of the kids to simply pretend to be good subjects. Then when the guards trust them enough to allow free movement – they’ll have their revenge.

This rebellion or revolution will be most likely be gory in both Tom and Matt’s case. However it would shock them to hear little Lexi disagree with them. In the fourth moths since she’s been separated from everyone else besides Ben, Maggie, and Lourdes – Lexi has once again aged exponentially. She’s a fully-grown woman and the surprises don’t stop there.

The adult Lexi has gone on to build a nirvana for refugees in the center of an Espheni occupied zone.

The area they’re staying in is no longer getting attacked by any of the aliens and so she’s talked people into believing that peace is now the answer. She got them to lay down their weapons and to accept her as their spiritual leader. But her brother, Ben, doesn’t like the cult like appearance of all of this.

He was in a coma for several months and when he woke up it was to that. So he doesn’t want to buy into it like Maggie and Lourdes have done. Ben wants to keep fighting and that’s because he knows what he’s fighting for – his family. Something Lexi has blissfully forgotten all about while she was busy playing Messiah.

Tom is going to break out of his prison cell and since a few of his Volm friends have returned – he will find a way to reunite his family. But will he still want his daughter by his side when no one knows what she is or what she’s capable of?