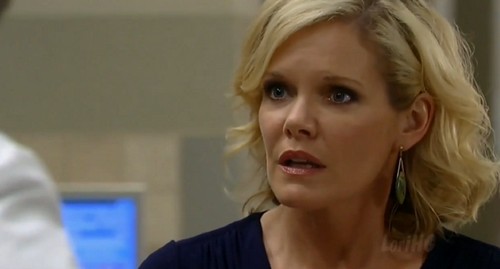 General Hospital fans are in a frenzy over the May 29th episode of the popular daytime drama. GH writers dropped bomb after bomb on unsuspecting fans, and there were some shocking reveals. CDL predicted weeks ago that Sonny Corinthos and Ava Jerome were going to wind up pregnant after their steamy hook-up in the crypt at AJ Quartermaine’s funeral.

And, lo and behold today Ava announced to Sonny that she was carrying his baby. However, it should be mentioned that she was under complete duress and begging him not to kill her, so there is a good chance the Jerome-Corinthos baby is just a figment of Ava’s imagination.

Sonny and Ava’s possibly growing family is just the tip of the iceberg. GH fans also learned today that Luke Spencer is not Luke Spencer, and definitely an imposter. We have speculated for months now that someone was terrorizing the residents of Port Charles and posing as Luke, and it turns out we were right again.

At the end of the May 29th episode of General Hospital Fake Luke went to Miscavige and visited Real Luke, who is still doped up in a straightjacket. And, it turns out Real Luke is just as puzzled as we are about his imposter’s true identity, because when he walked in he asked Fake Luke, “Who are you?”

Also during the May 29th episode, Julian Jerome and Fake Luke sealed an innocent man’s fate by telling the police that he is the mastermind behind the Jerome Organization. Who was their fall guy? None other than Ric Lansing, who was enjoying a romantic evening with Elizabeth Webber when the police barged in with an arrest warrant.

So as the week of May 26th comes to a close, the fans once again have more questions than answers. Is Ava Jerome really pregnant with Sonny’s baby, or could it be his son Morgan’s baby, or is she faking it all together? And, we now know for sure there is a Luke Spencer imposter, but who is it? And, what about poor Ric Lansing? He just got Elizabeth to give him another chance, did Julian and Fake Luke just blow it for him? Or will Elizabeth stand by her man? Share your thoughts and theories in the comments section below and don’t forget to check CDL tomorrow for more General Hospital spoilers.