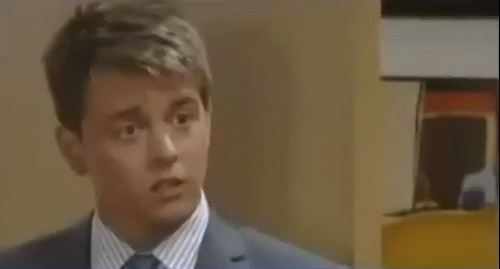 General Hospital fans have watched Carly Jacks and Sonny Corinthos fall in out and of love over and over again throughout the years. History has a way of repeating itself on soap operas, but Carly’s boyfriend Franco is determined to derail Carly and Sonny’s imminent hook-up as long as he can. A General Hospital spoiler video reveals that Franco is willing to take any means necessary to stop Sonny from stealing Carly away from him. And, it looks like Franco’s jealousy has brought the crazy back out of him.

On the last episode of General Hospital, Franco revealed to Sonny what GH fans have known for months now: Franco heard the recording of Sonny shooting AJ Quartermaine with his own two ears. And, in the General Hospital spoiler video, it looks like Franco is about to inform Michael that Sonny is the shooter who killed his father AJ Quartermaine.

If Franco wants to take down Sonny, he is going about it all right. Sonny’s weakness appears to be his children, and if Michael knows the truth about AJ’s death he will surely disown Sonny, and possibly even inform the cops of what he did. Franco’s plan is flawed though. Sure, if he tells Michael the truth about Sonny’s involvement in AJ’s shooting, Sonny will have more important things to worry about than his relationship with Carly. But, if Franco tells Michael the truth, it will crush him. And, crushing one of Carly’s kid’s hearts isn’t exactly the best way to secure a relationship with her.

What do you think General Hospital fans? Will Franco actually go through with it and tell Michael that Sonny killed AJ Quartermaine? Or, will he have a change of heart at the last minute? Share your thoughts and theories in the comment section below and don’t forget to check CDL tomorrow for more General Hospital spoilers.

What will their consequences  be of Franco’s bold move:

Sonny and Carly are a great super couple but I like Franco and Carly together. Franco is turning around and really loves Carly. Hopefully GH keeps them together.

oh if it is Franco that finks on Sonny, he will definitely be out of the relationship with Carly.

This is a sample of what fans at Soap Opera Spy Facebook page think about the situation. Will Franco fink on Sonny? If he does will Sonny kill him?