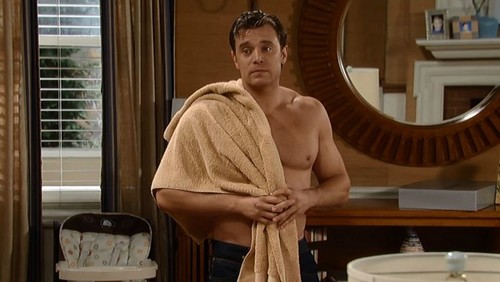 General Hospital spoilers tease that New Year’s Eve in Port Charles will be a memorable one, and romance will be in the air. The ABC spoilers for the week of December 29 reveal there will be tons of drama for the couples of General Hospital including Julian and Alexis, Sam and Patrick, Liz and Ric Lansing, Maxie and Nathan, and many more. New Year’s Eve is a magical night and the alcohol will be flowing, rumor has it that by the end of the festivities there will be one hook-up in Port Charles that we never saw coming.

Since Billy Miller arrived in Port Charles as Jason Morgan aka Jake, GH fans have been so infatuated with whether he was going to wind up with Liz or Sam, that we never considered the fact that it could be another leading lady entirely. Over the course of the last few weeks Carly has been spending a lot of time with the mysterious Jake, venting to him about all of her personal problems, and even helping him find a job. And, since Sonny is away, we can’t help but wonder if Carly will play… with Jason Morgan.

According to General Hospital spoilers for the week of December 29, Jake and Carly will “find themselves in an awkward position.” Sure that spoiler is pretty vague, but it has fueled a firestorm of rumors on message boards and social media that Jake/Jason Morgan could end up hooking up with none other than Carly. The soapy irony really is perfect, Sonny Corinthos is in love with Carly – and while he is in prison she hooks up with his best friend/right hand man. Although Carly and Jason’s friendship and tight bond was infamous among GH fans, they actually were lovers for a very short period of time in the 90’s.

What do you think GH fans, is there any chance that Carly could hook up with Jake, and not even realize he is actually her not-so-dead BFF Jason Morgan? How will Sonny react when he learns Carly cheated on him, even worse when he learns Carly cheated on him with Jason Morgan? Let us know what you think in the comments below and don’t forget to check CDL tomorrow for more General Hospital spoilers and news.

The fans at Soap Opera Spy  Facebook page have comments on this possibility:

Billy Miller has chemistry with EVERYONE!

Why not Carly? You said it girl

Joan Jipson Burgess She’s not even with Sonny. Just because they admitted their feelings,doesn’t make them a couple.Especially where he’s in jail. I hope they don’t drag out Jason’s idenity.I want Sam to know who he is. Poor Rick.You wait til Elizabeth knows who he is,I bet she’ll end up turning away from Rick once again.

I hope so…it would be OVERDUE sweet joyful pay back