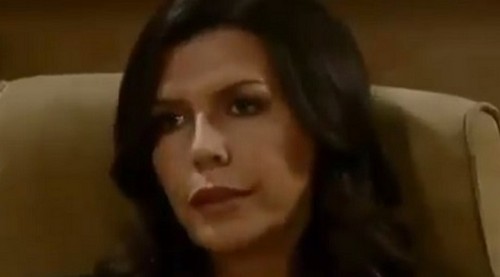 General Hospital spoilers reveal that Ava Jerome has leaked one of the best kept secrets on the ABC soap opera to her daughter Kiki and maybe baby-daddy Morgan. Months ago, Michael’s real father, AJ Quartermaine, was shot and murdered by Sonny Corinthos. Ava Jerome witnessed the entire crime. She then forced Carlos to confess to AJ’s murder to protect herself and Sonny, and Michael has no idea that Carlos isn’t his father’s real killer.

On Tuesday, September 30, Ava Jerome finally admitted to Kiki and Morgan that the reason Sonny wants her dead is because she witnessed him shooting AJ Quartermaine and threatened to expose his secret to Michael. There is a recording of AJ’s murder and Ava has been trying desperately to get her hands on it because it not only proves Sonny killed AJ but also that Ava killed Connie and pinned the murder on AJ. At first, Kiki and Morgan are skeptical, but they begin to realize that Ava’s confession all makes sense and explains why Sonny wants her dead.

In a General Hospital spoiler video for Wednesday, October 1, Michael and Kiki are talking and Michael demands to know why she “has a problem with his dad [Sonny] all of a sudden?” Kiki appears conflicted, and there is a good chance she is about to fess up and tell him about Ava’s confession. If Kiki tells Michael the truth about Sonny killing AJ Quartermaine and that his mom Carly helped him cover it up, all hell is going to break loose in Port Charles.

The GH spoiler video also reveals that fans can expect to see Elizabeth asking Patrick for a favor at the hospital and Silas accusing Sam of being “more than just friends” With Patrick. Meanwhile, Nathan pays Anna a visit and demands to know why his mother, Dr. Obrecht, is still being held by the Port Charles police.

So, GH fans, how long do you think Morgan and Kiki will keep Ava’s secret? Do you think Kiki will tell Michael that Sonny killed his dad AJ Quartermaine? How do you think Michael will react? Let us know what you think in the comments below and don’t forget to check CDL tomorrow for more General Hospital spoilers.