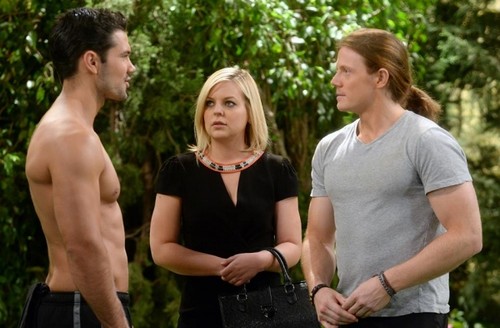 General Hospital fans have been watching the love triangle between roomies Nathan, Maxie, and Levi develop for weeks now, and according to GH spoilers the trio’s relationships are only going to get more complicated. Ever since Maxie returned form “finding herself” with her Aussie boyfriend Levi, the sparks between her and Nathan have been undeniable. On the July 3rd episode of General Hospital Nathan and Maxie spent the night handcuffed together, making it extremely difficult for them to avoid the chemistry between them.

According to General Hospital spoilers, Maxie and Nathan will wake up still handcuffed together on July 7th, and Levi will arrive home from the police station. He spent the night in a Port Charles jail cell after he was dragged away in handcuffs for protesting the Brownstone Project. GH spoilers tease that when Levi arrives home, he reveals to Maxie and Nathan that the PCPD didn’t press charges against him because his Visa is expired and he would have to be deported back to Australia.

Nathan can’t stand Levi, for two obvious reasons. The first being that he clearly has feelings for Maxie, and Levi is standing between them. And, secondly he knows Levi ratted him out to the judge for lying on Maxie’s behalf, and he nearly cost Nathan his badge. Being a police officer, all Nathan will have to do is make a phone call and have Levi deported and out of his and Maxie’s lives for good. However, if he does have Levi deported, Maxie may never forgive him.

Rumor has it that Maxie may shock everyone and marry Levi, so that he can be a legal citizen and won’t have to be deported. Do you think that Maxie would go as far as to marry Levi to keep him in the country? Or, will Nathan call immigration and have Levi deported so that he can have Maxie all to himself? Let us know what you think in the comments below and don’t forget to check CDL daily for all of your General Hospital spoilers.