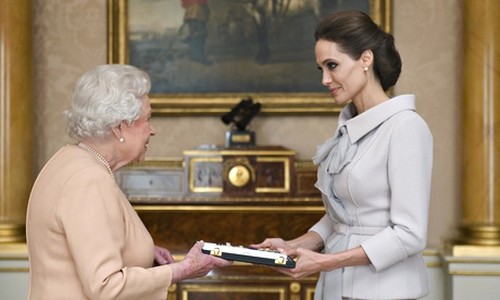 I’m putting it nicely – right now, there are ZERO Oscar pundits that have Jennifer Aniston on their list for an Oscar nomination. A Golden Globe nomination? Sure, it’s split into two categories, and Jennifer Aniston’s schmoozing will probably net her a cursory nomination. However, Angelina’s Unbroken has real awards buzz, and early reviews are calling it one of the season’s best movies. So no matter how you slice it, Angelina Jolie’s coming out of this the winner – whether she intended to ‘win’ or not.

However, the National Enquirer’s sources are apparently under the impression that Jennifer Aniston will somehow wrangle a nomination and invite to the Oscars this year, because their ‘source’ claims, “It’s going to be the most talked-about event of the awards season, and everyone is hoping for a major catfight! But each of them have told Oscar organizers that under no circumstances is there to be any risk of a run-in.”

Replace ‘Oscar’ with Golden Globe Awards, and you have yourself a catfight in the making. Jennifer Aniston might make an appearance at the Oscars as a presenter, but there’s no way she’s going as a nominee, mark my words. This year’s Best Actress category is already getting too crowded, and there’s no way in hell Jennifer’s performance is getting her on that list.

What do you guys think? Is the Angelina Jolie/Jennifer Aniston feud ever going to come to a rest? And will the two face off at the Oscars and/or The Golden Globe Awards? Let us know your thoughts in the comments below.