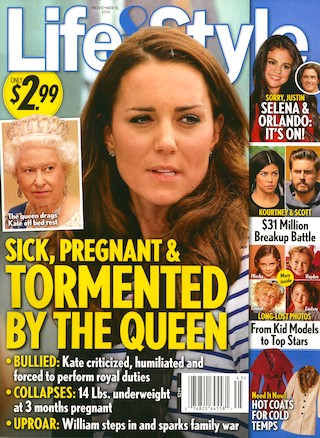 Kate Middleton is apparently sick, pregnant, and being tormented by Queen Elizabeth. So in other words, just like every other Telenovela you see on TV. The evil mother-in-law is controlling her innocent daughter-in-law, even though that daughter-in-law is sick and puking her guts out every day. This is all nonsense, except for the pregnant part! As GLOBE said today in the November 10th edition, Queen Elizabeth wants Prince William and Kate Middleton on the throne next, hardly what one would expect if Queen Elizabeth were at war with the Duchess of Cambridge and “dragging her off bed rest.”

Of course, that’s not really what’s going on here and L&S is simply wrong. According to the latest cover issue of Life & Style Magazine, Queen Elizabeth was the one who finally forced Kate Middleton out of her sickness-induced isolation, and made her make three back-to-back public appearances in one week. Although all the royal sources – and Kate herself – have been claiming that Kate is doing much, much better, Life & Style’s sources claim that it’s all a lie. Apparently, makeup, nice clothes, and flattering lighting make a world of difference when faking good health, and Kate Middleton is still really sick.

These same sources add that Kate is 14 pounds underweight, and collapsing, even though she’s three months pregnant. L&S actually has the temerity to print in reference to Kate Middelton: ‘Collapses: 14 lbs. underweight at 3 months pregnant.’ Of course we just saw Kate looking amazing in 3 appearances last week where she was neither underweight nor collapsing! (Check the pics below) Not only that, but she’s apparently being humiliated and ridiculed behind the scenes, which has caused Prince William to step in and ‘spark a family war‘.

Please, what family war? The royals have always been at war with each other, and while I can see Prince William jumping to his wife’s defense, there’s no way that family can get any more dysfunctional than they already are. We are calling ‘not true’ on this entire report which runs counter to all available evidence.

Life & Style also has a featured report on how Selena Gomez and Orlando Bloom are officially dating, and how Kourtney Kardashian and Scott Disick are reportedly getting a $31 million divorce. My, what a wonderful week for celebrity relationships, no?