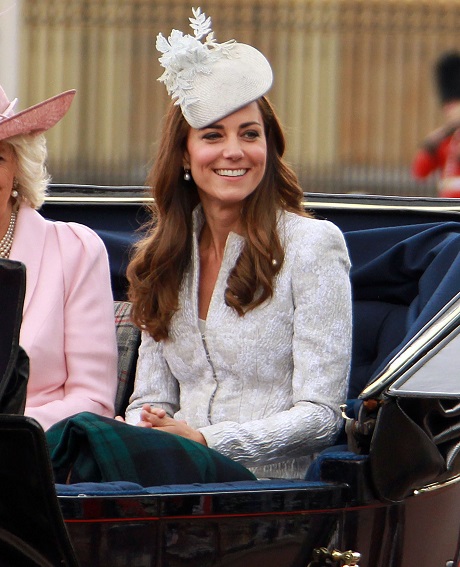 The Queen celebrated her official birthday and was treated to a rather special ceremony. Prince William, Prince Harry, Kate Middleton, Prince Philip, and others were all in attendance to honor Her Majesty — and Prince Harry even managed to crack a few jokes and get his sister-in-law to laugh. It’s good to see her laughing and taking the world lightly, especially after being unable to escape the pregnancy rumors and the negative gossip surrounding her bare bum cheeks!

The members of the royal family gathered on the balcony of the Buckingham Palace, where the Queen and her family watched an RAF flypast, which followed the Trooping the Color ceremony. During this parade, the Queen inspected 1,000 soldiers of the Household Division at Horse Guards Parade. All the action happened in central London and, judging from the pictures (which you can check out below), the celebration was a joyous one!

The Daily Mail UK reports, “[The Queen] arrived in an Ascot Landau carriage after the short drive down The Mall from Buckingham Palace, accompanied by the Duke of Edinburgh. Wearing a powder blue satin silk coat, dress and hat with navy trim, all by Angela Kelly, with a Brigade of Guards brooch, the Queen then rode alone in the carriage – the first time she has ridden in it for this ceremony – to inspect her troops.”

Prince George didn’t appear to be in attendance; however, his mother, Kate Middleton, was in top form and dressed in a beautiful powder-blue satin silk outfit — a similar color to the Queen’s outfit. Aw, how precious, they were matching!

Check out the great gallery we have for you below and don’t forget to let us know what you think about this special day!