Kim Kardashian’s Boobs Flying Out Of Her Dress While On New York City Stroll! (PHOTOS) 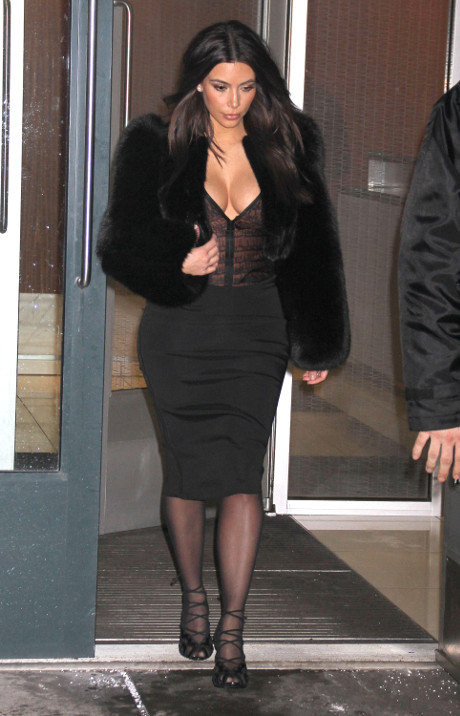 Kim Kardashian, whose empire continues to reign supreme, was spotted in New York City yesterday and, perhaps to nobody’s surprise, was seen baring — nearly losing! — it all. Kim was photographed leaving a building; Kanye and baby North West weren’t by her side. She wore a black dress, which emphasized her cleavage, and a matching black fur top. This is just more photo proof that the Kardashian and Jenner girls love their breasts and have no shame in showing them off to the world.

Apparently, Kim and Kanye are well on their way to planning one of the biggest celeb weddings ever, and they’re supposedly in talks to get some legendary performers. Stevie Wonder and John Legend are currently on their radars; however, as far as we know, no gigs have been finalized. But if Kanye West has any say in the matter, he’ll get anybody he wants to perform at his wedding. Because performers in the music industry should only be so lucky to perform at your wedding, amiright Kanye?

They want this wedding to convey the fact that they’re royalty: “She’s telling friends, ‘We picked a date!’ She and Kanye will be in handcrafted headpieces he commissioned for them,” a source told US. “Kanye thinks he and Kim are royalty. No expense will be spared… it’ll be over the top!”

Check out the photos of Kim below and let us know what you think of her royal evening look!