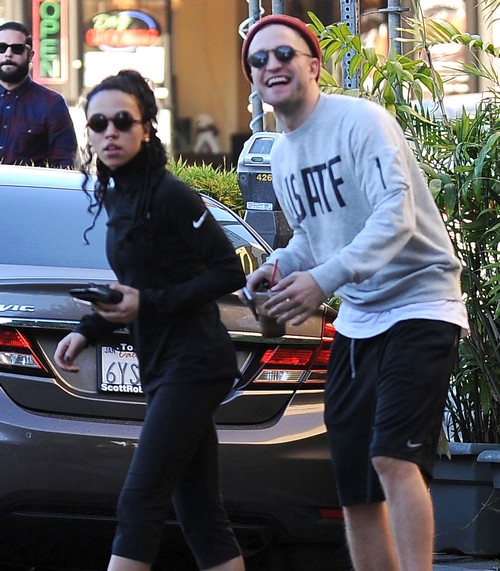 Kristen Stewart is doing her best to avoid FKA Twigs and Robert Pattinson ever since they have been dating. Kristen Stewart hates FKA Twigs and is avoiding running into Robert Pattinson while he is being made a fool of by his latest fling- can you blame Kristen? It’s one thing to face your ex-boyfriend in the news, and it’s quite another to meet them face-to-face. So far, Kristen Stewart has managed to avoid the humiliation of running across Robert Pattinson in front of the media, although there were a couple of close calls at film festivals over the last two years. Even though Robert Pattinson actually admitted that he and Kristen were still in touch [up until a few months ago], it’s different now that Rob is in a committed relationship with FKA Twigs. It’s no longer a possibility that Rob and Kristen will get back together [for now], and instead, the entire focus will be on Kristen Stewart’s specific reaction to seeing her ex-boyfriend shacking up with one of the biggest famewhores around. Will Kristen ignore FKA Twigs? Will she give her the fly-by? Will she shake her hand? Will they [GASP] hug?

From what our sources tell us – and what we know of the situation, Kristen and FKA have never actually met in person. Well, of course – FKA Twigs was pretty much a non-entity before she started dating Robert Pattinson, and now she’s a celebrity landing Vogue features and Rolling Stones interviews. Kristen wouldn’t have had a clue who FKA Twigs was a few months ago, but things have changed now, obviously.

That’s one of the reasons why Kristen is studiously avoiding running into Rob and FKA at events, especially events with the press and paparazzi present. Kristen may be single two years after her breakup with Rob, and she might even be desperate to get back together with him, but meeting Rob and FKA at public events won’t help her. They’ll do the complete opposite in exposing her vulnerabilities to the media, and it will just become more of a twisted love triangle than it already is – despite all three of the participants’ unwillingness to discuss their love lives with the media. Plus, the longer Kristen continues avoiding Rob and FKA in public, the less smoke she adds to the gossip fire.