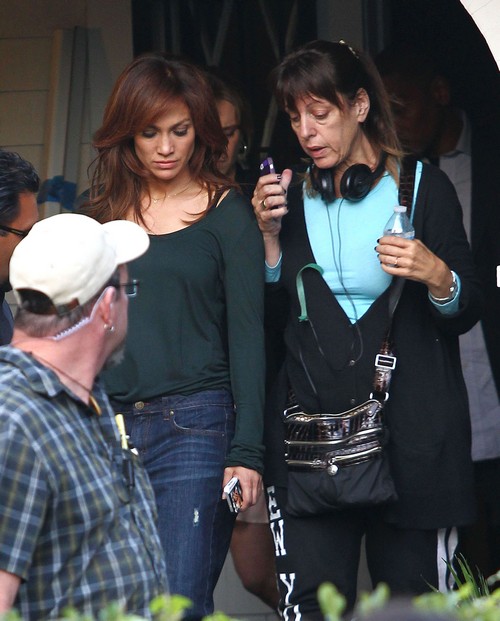 Maksim Chmerkovskiy and Jennifer Lopez are dating, and they don’t care if you know it. When Maksim was confronted by a cameraman and asked about dating Jennifer Lopez, instead of denying the rumors, all Maksim would say is that it’s ‘going great’. He avoided answering all of the other questions, even though he had just been shilling his vodka line to the same TMZ cameraman.

As we know, Maksim and Jennifer were pictured looking pretty cozy at a party in Connecticut on Saturday night, and this recent confirmation pretty much makes it a done deal. So much for Meryl Davis, right? The poor thing didn’t stand a chance against Jennifer Lopez, especially when J.Lo was clearly desperate to move on from Casper Smart. It look her, what, all of three seconds to find a rebound boyfriend?

Plus, we’re already anticipating Maksim’s and Jennifer’s engagement announcement within the next few months. Barring Casper Smart, Jennifer has the tendency to fall in love and get serious with her boyfriends very quickly. She usually gets engaged to them within a year, if not a few months. And considering how cozy Jennifer and Maksim looked in that picture – and Maksim’s ‘it’s going great’ comment – we’re guessing that they’re already halfway there.

Some people might say that Jennifer’s too A-list for Maksim, but remember, this is a world in which reality stars rule the media roster. Plus, Jennifer always, ALWAYS dates people way below her place on the fame ladder.And Maksim is such a big improvement over Casper that she should be commended for finally trading higher, instead of diving for the dumpsters in search of her next boyfriend. I really thought that was where she was headed next, after watching her go from Ben Affleck to Marc Anthony to Casper Smart.

Photo Credit: FameFlynet – Jennifer Lopez seen filming a commercial in Hollywood, California on June 23, 2014. Jennifer’s good friend actress Leah Remini stopped by the set to hang out. Jennifer recently broke up with long time boyfriend Casper Smart and its rumored that she was flirting with Maksim Chmerkovskiy at the Shrine Nightclub in Connecticut on Saturday