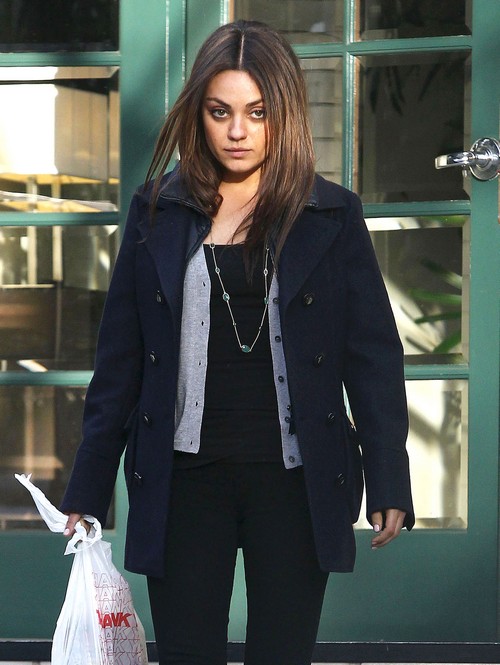 Poor Mila Kunis. Imagine stepping out after eating a ton of food and then having the whole world speculate that you’ve gotten pregnant and gained a baby bump. Unfortunately, that’s exactly what’s happening right now.

Whether Mila’s pregnant or not, the speculation has kicked into high gear after she was spotted sporting a slight stomach bump. The pictures of this supposed baby ‘bump’ were taken on February 4th in Los Angeles, and to be fair to Mila, she is wearing a tight black top and the angle is clearly unflattering. Anyone who eats a lot of food in that kind of figure-hugging top will end up showing a bump, which is usually indicative of a food baby, not a real baby.

However, it’s also very possible that Mila is pregnant, although it’s clearly not been that long if she really is expecting. The bump is very slight, slight enough to be mistaken for a food baby. If she’s been expecting for the past few months, then the baby bump would have been bigger by now – and it would be easier for witnesses to say that she was pregnant, instead of pointing to an almost non-existent bump on her stomach.

Despite that, both Ashton [Kutcher] and Mila have reportedly told friends and family that they’re excited to have children. Plus, there are plenty of rumors circulating about their upcoming wedding nuptials, and a baby would be an obvious next step.

What do you guys think? Is Mila really pregnant, or is that a combination of an unflattering shirt and an unflattering angle? Let us know your thoughts in the comments below.