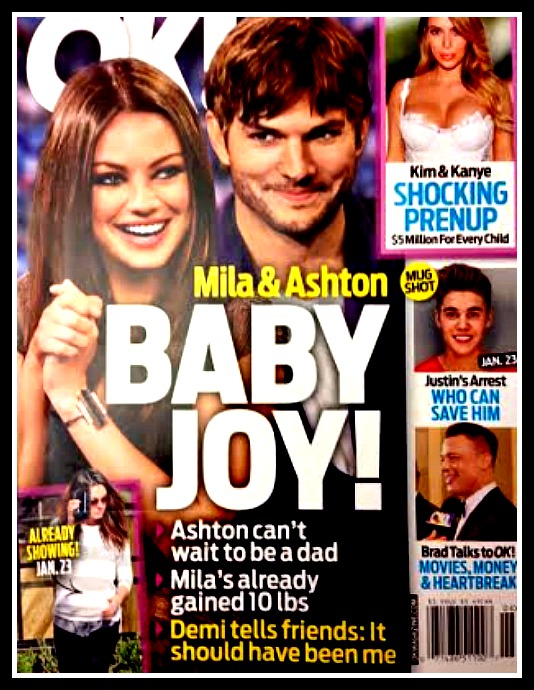 The latest cover story from OK! Magazine once again focuses on the relationship between Mila Kunis and Ashton Kutcher, and Mila’s rumored pregnancy. According to the cover, Mila and Ashton are ecstatic and joyous over Mila’s pregnancy, and Ashton apparently ‘can’t wait to be a dad’.

The report also alleges that Mila’s already put on ten pounds of pregnancy weight, with a picture attached from January 23rd that’s supposed to convince us that Mila’s gained weight. Tabloid pictures are notoriously misleading, and honestly, Mila does tend to put on some weight when she’s not filming – plus, the camera angle could be unflattering, considering she’s wearing a sweater in the pic.

Either way, the report takes it as fact that Mila’s pregnant, with a source adding that Demi Moore is apparently telling friends that it should have been her that was pregnant with Ashton’s baby, not Mila.

OK! also has a report on Kim Kardashian‘s alleged prenup with Kanye West, which includes $5 million for every child. Kris Jenner probably wrangled Kim this prenup, because there’s no way I can see Kim having the guts to pull this off. But either way, this means that all she has to do is pop out another two babies, and she’ll be set for life.

And in further proof that Brad Pitt is desperate to win that Best Picture Oscar for 12 Years a Slave, he’s actually speaking to OK! Magazine in an extensive interview, chronicling his movies, money, and ‘heartbreak’. I’m guessing the actual interview will be far less scintillating than it sounds, but the fact that Brad’s even agreed to speak to a weekly tabloid other than People means that he’s upping his campaign game from now until the Oscars in March. Prepare for a lot more Brad Pitt interviews, people. He’s going to play like he’s never played before.