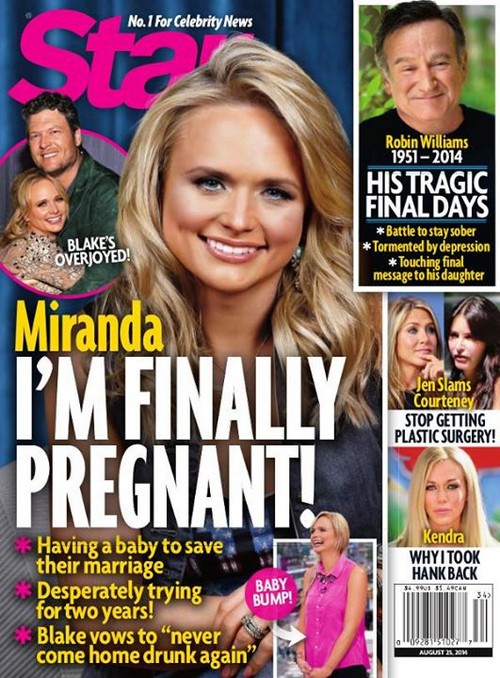 It seemed as though Miranda Lambert and her hubby Blake Shelton weren’t doing so hot for the last few months. The tabloids have suggested that it’s because Miranda refuses to get pregnant, but perhaps that wasn’t necessarily true. Star Magazine reports that Blake and Miranda are finally expecting their first child, and Miranda’s pregnancy came as a surprise to both of them – and us.

Star’s source explains, “[Miranda] and Blake are keeping any baby news a secret for now, but everything points towards Miranda being pregnant.”

It’s about time, right? Blake and Miranda have been married for three years and together for six years, and the rumors always claimed that both of them desperately wanted kids. At the same time, their busy schedules, their arguments, their time apart, and their lack of interest drove them apart and prevented any serious discussions about having a child. But voila, Miranda loses a bunch of weight and she and Blake are expecting a few months later? Don’t expect me to believe that’s a coincidence.

Plus, some sources even claim that the sole reason for Miranda’s drastic weight loss was so that she could have kids. A lot of people have fertility issues at a higher weight, and Miranda might have been one of them. But also, the pure fact of the matter is that getting pregnant is probably going to keep Miranda and Blake together longer. The baby might even prevent Blake’s drinking, partying, and cheating, which might also be the reason that Miranda worked so hard to get pregnant.