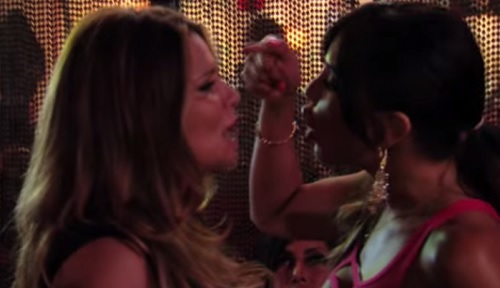 Mob Wives: New Blood Season 5 spoilers reveal that the exciting VH1 reality TV show will return on Wednesday, December 3 at 9:00 PM with the premiere episode. Our favorite mobstresses, Angela “Big Ang” Raiola, Drita D’Avanzo, Renee Graziano, and Natalie Guercio will all be returning. According to Mob Wives spoilers – one of the newer editions to the cast, Alicia DiMichelle, will not be featured on Season 5. However, Mob Wives alum Karen Gravano is back, and just as crazy as ever.

The official Mob Wives: New Blood Season 5 synopsis from VH1 teases, “The group is in for a surprise when Karen Gravano stages an unexpected return to Staten Island. Last season, lifelong friendships were put to the test as “New Blood” infiltrated this tight-knit circle, and these relationships remain as complicated and volatile as ever. Ever-shifting alliances are a recipe for an explosive mix of unpredictable tension, conflict, and intrigue.”

In an all new Mob Wives promo video VH1 teases that, “No one can be trusted.” The spoiler video reveals a major feud between Karen Gravano and newbie Natalie Guercio. The argument kicks off with Karen calling Natalie a “cop caller” and of course ends with a slew of swearing and an all and out brawl. Even Big Ang, who usually serves as the moral compass of the group announces she wants to “snap her neck” and can be seen lunging after Karen Gravano.

It’s safe to say that Season 5 of Mob Wives may be the craziest season ever, and after Renee Graziano’s super scary Vegas meltdown during Season 4 – we thought the reality show couldn’t get any crazier. So Mob Wives fans, with Alicia gone, are the other girls going to chew up and spit out Natalie Guercio? What do you think of Karen and Big Ang fighting, if you had to put money on it who do you think would come out on top? Let us know in the comments below! And, don’t forget to check CDL for all of your Mob Wives Season 5 spoilers and news.