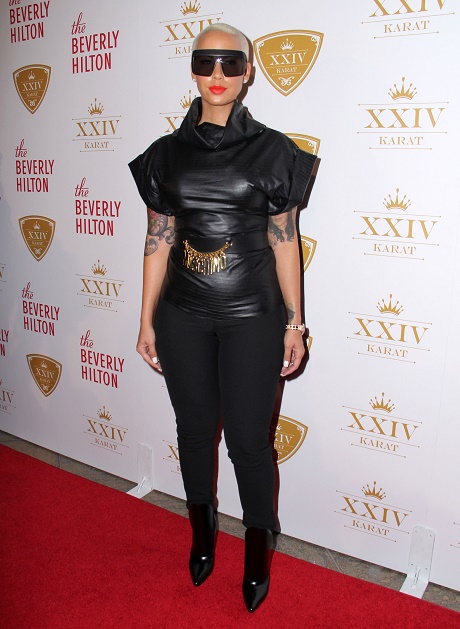 Since Amber Rose and Wiz Khalifa divorced, her rumored romance with Nick Cannon is heating up, and they seem to be covering it up with a business relationship. Mariah Carey knows better and makes sure everyone else knows that Nick is a cheater as well. You’d think that after Amber Rose and Wiz Khalifa divorced following her rumored romance with Nick Cannon, Amber would know better than to continue her ‘business relationship’ with Nick. However, a famewhore is a famewhore, and Amber knows her best way of climbing to the top of the A-list is hobnobbing with the bigwigs – or should I say, establishing ‘business relationships’ with them. According to reports, Amber and Nick have not only maintained their correspondence following Amber Rose’s divorce, but they are now planning a book together.

Nick even told US Weekly his plans for making Amber the next big star, explaining, “I feel like she’s one of those people who is truly an icon when it comes to fashion, style, and even just someone in pop culture. I want to help develop a lot of things and the first thing we are starting with is a book. We just did a huge book deal that we are really excited about.”

Of course they’re excited about it – it will allow them to continue sleeping together without raising more suspicion, although plenty of people suspect them of continuing their illicit affair. But then again, we know that neither Nick Cannon nor Amber Rose care about being faithful to their significant others, especially since they BOTH [allegedly] cheated.

Nick Cannon and Mariah Carey are still not officially divorced, but sources tell us it’s only a matter of time. And at that point, Nick and Amber will have no reason to hide, which will probably give birth to the next disgusting step: a Nick Cannon/Amber Rose relationship. What do you think about Nick Cannon & Amber Rose dating behind everyone’s backs?