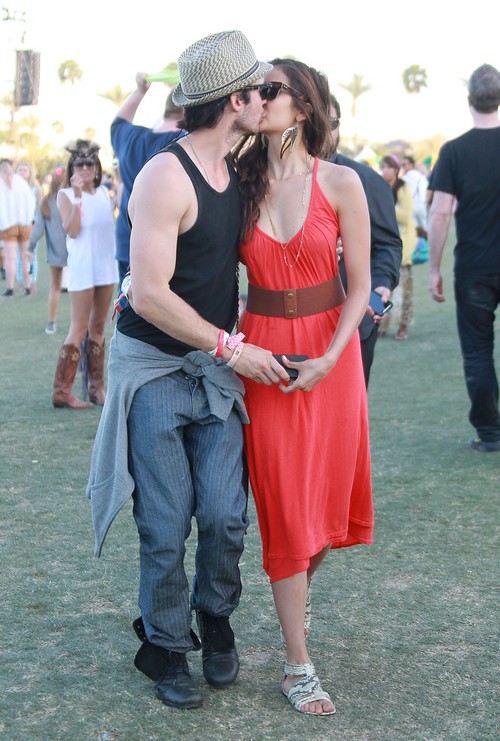 Nina Dobrev and Ian Somerhalder back together? Say it aint so! If this is a false alarm, it sure as hell is a heartbreaking one, especially for all of us Vampire Diaries fans. Sue us, we want to see our favorite on-screen couple back together, even if it might wreak havoc on the some of the story lines on the show.

Anyway, anyone who’s followed the Nina and Ian gossip mill for the past year should be well versed in their history. After denying rumors of trouble in paradise for a few months, Nina and Ian finally broke up last spring. They claim to have parted on amicable enough terms, even though rumors kept cropping up about affairs and cheating on both their parts. We still can’t definitively say what happened to break them up, but the two did seem friendly enough once the Vampire Diaries production started back up. On-set sources also claimed that the two remained on very good terms – and in the past few months, a little ‘too’ friendly, if you get our drift.

Can you blame them for giving into temptation? Chemistry doesn’t just vanish after a breakup, and it must have been hard enough for them to see each other every day after breaking up. So they reportedly started hooking up again, and really, that happens all the time with exes. But when Ian wanted to get back together, Nina reportedly balked and backed off – and then ended up rebound dating Derek Hough and hooking up with Liam Hemsworth. Ian waited, but when it looked like she wasn’t going to come back to him, he went his own way and started flirting with other women – including his ‘good friend’ Molly Swenson. We won’t even go into their relationship [basically, they were holding hands but she denied they were dating], but it didn’t work out. But hanging out with Molly seemed to do the trick – it reportedly made Nina very jealous, and also made her realize that she did want to get back together with Ian.

So now, they’re supposedly back together – but on a trial basis. Nina has agreed to give Ian one more chance, and provided he doesn’t screw it up, it looks like we might actually see them last.