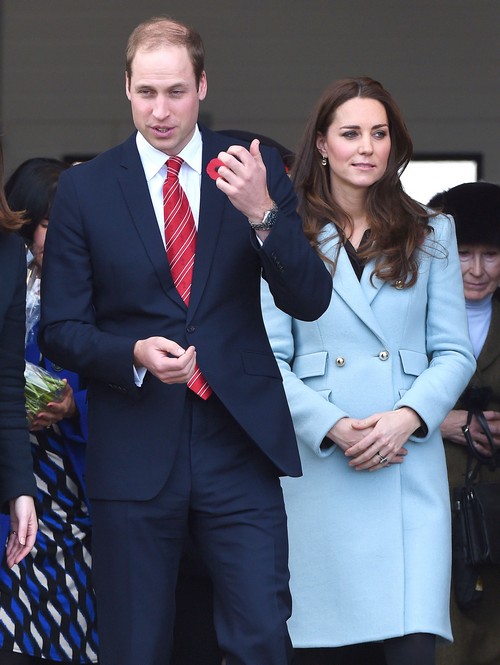 Kate Middleton’s hair was was on the receiving end of some nasty passive-aggressive fighting behavior courtesy of balding Prince William. Oh, Prince William. Prince William and Kate Middleton might appear to have a picture-perfect marriage to any innocent bystander, but any loyal royal watcher knows otherwise. Even if Prince William and Kate Middleton are not openly fighting any longer, that doesn’t mean their marriage is perfect, nor does it mean that William will refrain from pissing off his wife on a regular basis. This time, Will’s faux paux has to do with Kate’s hair – you know, what the media and public generally describes as pretty, gorgeous, glossy, beautiful, etc.?

But you can’t miss the irony here – the horse-faced William is getting uglier by the month and his hair is falling out at an alarming rate! This is why Kate and William’s enemy and arch rival Camilla Parker-Bowles calls the future monarch ‘The heir with no hair!’

Well, Prince William doesn’t agree. While William was at a homeless charity named Centrepoint for a private visit, he reportedly joked about Kate’s ‘nightmare hair’ to a trainee hairdresser. That’s right – Prince William actually used the words ‘nightmare hair’ to describe Kate’s luscious locks, the same ones that millions of women around the world are constantly trying to emulate. Does this say something about us or something about them?

We know that Kate Middleton spends a ridiculous amount of time styling her hair and making it perfect, even though it does have a tendency to look the same no matter what she does. But William calling Kate’s hair ‘nightmare hair’ is a faux paux that I don’t think she’ll forgive – or at least, you know it’s going to cause one hell of a fight if Kate hears about it. And the way the media is picking it up, I don’t think she can NOT hear about it.

What do you guys think? Was Prince William just messing around when he referred to his wife’s hair as nightmare hair? Or even if he was, is that not something he should joke about in public? Honestly, Prince William should know by now that everything he says or does will be extensively documented and reported upon, so he really should have known better than to insult Kate’s hair. Let us know your thoughts in the comments below.