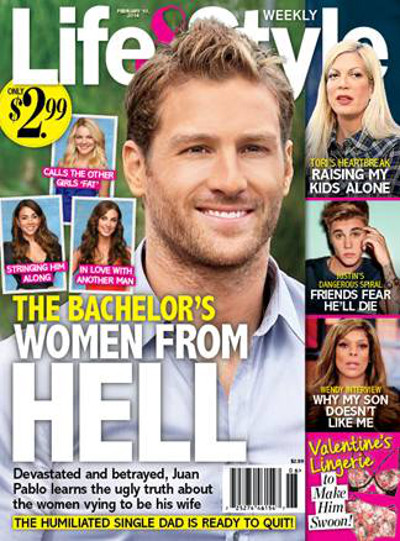 Juan Pablo‘s been having a tough go at it this season on The Bachelor, and let’s just hope he actually finds himself a lucky lady by the end of the season. The two most recent contestants to get the boot, Lauren Solomon and Elise Mosca, gave their farewells on last night’s episode. While Juan might’ve thought his choice to be a tough one in that moment, new information reveals that he probably (definitely!) dodged two speeding bullets, ones that could’ve potentially spelled disaster for his romantic future.

In the new issue of Life & Style, a source reveals that Lauren actually shouldn’t have been available to compete on the show at all — as she was supposed to marry her fiance, Blake DuPlant. However, she became available once the wedding was canceled after she CHEATED on him. She met her ex-fiance on the game show Minute to Win It. Because that game show love was a no go, she thought it might be logical to hop on board another game show.

“She told the girls in the house that the engagement was called off, and was vague about the details. She later admitted what really happened,” the source dishes. “She cheated, he caught her and that’s why it ended!”

Elise Mosca is a whole different story. While she put on a “good girl” show for the cameras (and for Juan), a source for the tabloid reveals that she’s actually a hardcore party girl and even had a scandalous Jersey Shore style fling with The Situation. “She wanted The Bachelor to be a stepping stone,” a co-worker reveals. “She likes the Hollywood scene. I think the show is going to give her 15 minutes of fame.”

What do you think about the crazy women Juan avoided? It certainly doesn’t seem like they were going into the show to find their one true love. Gasp! But we thought that’s what the show’s all about, ultimate romance. Haha. More like ultimate famewhoring. Pick up your copy of the magazine to get all the details. It hits newsstands tomorrow.