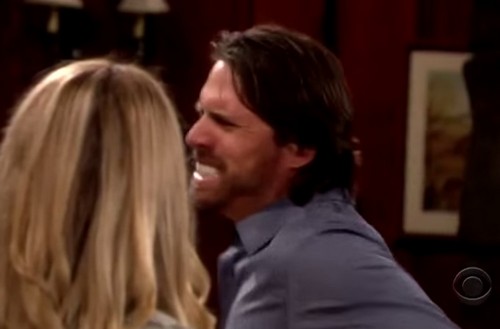 According to The Young and the Restless spoilers for the week of July 28 – August 1, Y&R fans are in for a treat, as multiple storylines reach their boiling point on the CBS soap opera. Victor Newman has a nasty way of hurting his family while he is trying help them. He is determined to find out what Sharon’s secret is to protect his son Nick, but in the process he will have betray other members of his family.

In order to find out what Sharon is hiding from Nick, Victor has to bring Phyllis Newman back from her coma, and he has enlisted the help of coma specialist Dr. Hans Cutler. The only problem is, Dr. Cutler needs permission from Phyllis’s family to go forward. So, according to The Young and the Restless spoilers, Victor tricks someone into signing a release form (most likely Summer, since she’ll sign for anything).

Victor Newman might be going through all of this trouble for nothing though, because a Y&R spoiler video for the week of July 28th shows Sharon Newman announcing to Nick that she remembered what she did. And, apparently whatever she tells him is enough for him to storm out of the house and leave her. Sharon might reveal her own secret before Victor has a chance to. Hopefully, Nick doesn’t turn to Mariah for support, because according to Y&R spoilers she will try to seduce him during the week of July 28th.

The Young and the Restless spoilers for the week of July 28th also tease that Lily sets her brother Devon up on a date with Abby. Little does Lily know, Devon isn’t exactly single and ready to mingle, because he is having an affair with his new step-mom Hilary. While Neil jets off to Hong Kong, Devon takes his father’s request to look after his wife a little too literally, and makes sure that all of Hilary’s needs are met.

So Y&R fans, do you think that Sharon finally remembers that she tampered with Summer’s paternity test? Do you think Nick will forgive her for what she did? And, what about Mariah, would Nick really hook up with someone who could pass as his dead daughter’s twin? Let us know what you think in the comments below, and don’t forget to check CDL tomorrow for more The Young and the Restless spoilers.