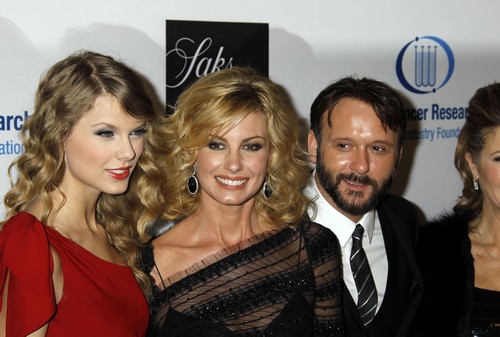 Country singer Tim McGraw is in hot water today after slapping a female fan at across the face at his concert on Sunday night at Aaron Amphitheatre at Lakewood in Atlanta, Georgia. A fan recorded a video on their cell phone as Tim McGraw walked into a sea of screaming fans in the middle of singing one of his popular songs.

TMZ has just released the cell phone video and McGraw can be seen being mauled by fans. One woman clearly grabs the singer’s legs twice, and comes ridiculously close to hitting him where it counts. Fifty seconds in to the video the woman grabs his leg a second time, and McGraw cocks back and smacks her hard across the face. As he keeps singing, you can see a security guard enter in the bottom left hand corner of the screen and pull the woman out of the crowd.

McGraw’s rep told TMZ that “Tim was singing out in the audience and someone firmly grabbed onto his leg and wouldn’t let go as he was moving through the crowd. He instinctively swatted to try to keep them from ripping his jeans, and so he could get to more fans who could slap hands with him before the end of the show.“

The woman that Tim assaulted hasn’t come forward yet. So, either she was too drunk to remember that she was smacked across the face. Or, maybe she was so flattered that he took the time to hit her that she isn’t interested in pressing charges. Do you think Tim McGraw had a right to slap his crazy fan? Or did he cross a line? Sound off in the comments below.

UPDATE: The fan ripped Tim’s Jeans as the second video shows – so does that give Faith Hill’s burden the right to assault the fan?