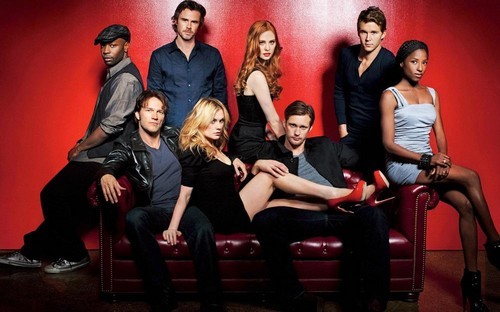 The season 7 premiere episode of TRUE BLOOD aired tonight and it was jammed packed with action and lots gore.  If you are a big True Blood fan, this season is the final season and I am sure it is not going to disappoint.  If you are like me and you are anxiously awaiting each episode, we have managed to get our hands on a sneak peek video and some spoilers to wet your appetite for next week’s episode 2 called “I Found You.”  So sink your fangs in and enjoy!

On tonight’s episode a band of rogue H-vamps crashed the vampire-human mixer at Bellefleur’s, with shocking results. As Sookie (Anna Paquin) sought refuge from accusations that she was somehow to blame for the chaos in Bon Temps, the “one vampire for every human” plan moved forward. In the face of a vigilante insurrection led by redneck Vince (Brett Rickaby), Bill (Stephen Moyer) received aid from an unexpected source.  More happened, did you watch the episode?  If you missed it we have a full and detailed recap, right here for you.

Spoiler alert: If you’re one of those people who doesn’t like spoilers, stop reading now! We have some juicy spoilers for you about the season 7 episode 2 of HBO’s “True Blood.”

Official HBO synopsis of next week’s episode: “A trio of hostages taken in the Bellefleur’s attack looks to a familiar face as a possible liberator from the H-vamps. Sookie and Jason (Ryan Kwanten) visit the neighboring town of Saint Alice, where a young woman’s diary offers clues to the potential fate of Bon Temps. Spurned by Lafayette (Nelsan Ellis), a desperate Lettie Mae (Adina Porter) turns to Willa (Amelia Rose Blaire) to channel her family past. Vince whips his fellow vigilantes into a dangerous frenzy. Pam’s (Kristin Bauer van Straten) search for her maker leads her to a very familiar place.”  The episode was written by Kate Barnow; directed by Howard Deutch.

Next week’s episode is going to be so intense! Make sure to check out the preview clip below!

True Blood season 7 episode 2, “I Found You” airs on HBO on July 29th, 2014.   Check out the preview video below of episode 2 below and let us know in the comments below what you think!  Are you enjoying season 7 of True Blood?