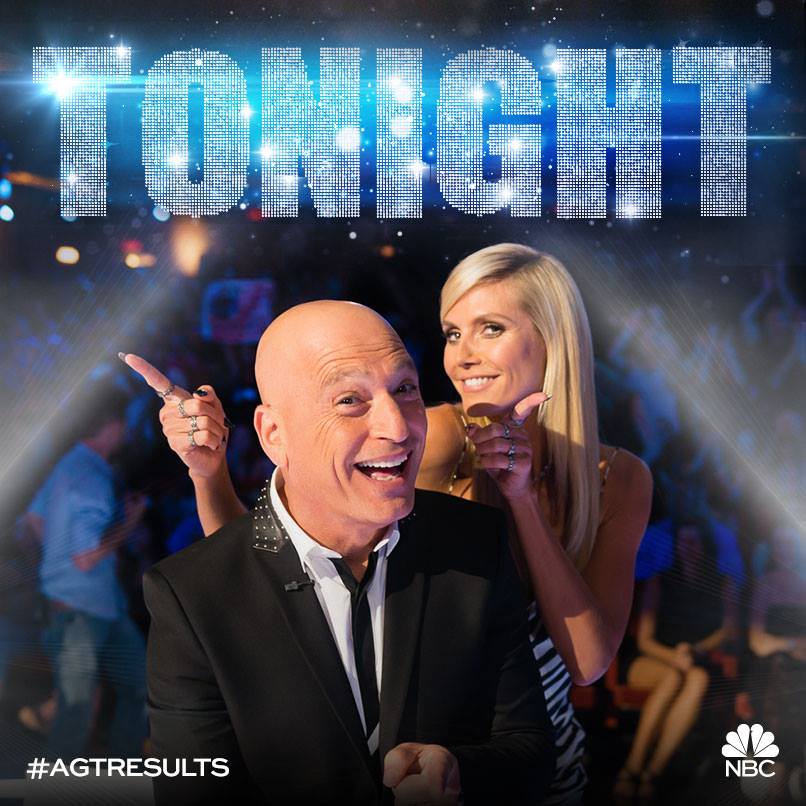 Tonight on NBC America’s Got Talent returns with an all new Wednesday September 9, Season 10 episode 20 called “Semi-Final Results 2”. We’ve got your recap down below! On tonight’s episode five acts advance to the final round in a results show.

On the last episode, eleven semi-finalists performed live for America’s vote and the chance to win $1 million and a headlining show in Las Vegas. Starring celebrity judges Howie Mandel, Mel B, Heidi Klum and Howard Stern. Did you miss last night’s episode?  If you did you can see a full and detailed recap, right here.

On tonight’s episode per the NBC synopsis “the votes are in and five of the previous night’s performers will move on to the Finals. Tonight, viewers will have one last chance to send their favorite act to the Finals by using the Dunkin’ Instant Save. Featuring special guest performances and hosted by Nick Cannon.”

#AGT10 is the live results tonight to determine the final five acts that will move on to the finals. The Live Dunkin’ Save is active now and Nick Cannon reveals those three in the challenge are Freelusion, Gary Vider and Uzeyer Novruzov. Fans can vote live now online by Googling Dunkin’ Save. The judges give a few comments about each of them and we see the live votes as they start to roll in.

The first results are 3 Shades of Blue vs Daniella Mass. Mel B says she’s shocked they’re facing off. Nick says neither of them are moving on and they’re both out of it. Both Daniella and the rockers are shocked with this evil twist. Mel B says she’s confused and says she thinks they will both have long careers. Nick sends them off the stage confused and disappointed with the #AGTResults.

We get a look at Best Time Ever, Neil Patrick Harris’s new show that starts next week after AGT. We see a montage of little kids talking about their favorite judges. The kids all say yuck when ti comes to Howard. One calls him old, then wrinkly and another says he’s 105. Then Howard shows up in the classroom. He says he’s Harry Styles’ daddy. One kid asks why he’s always grumpy.

Howard says there was no electricity when he was a kid, no Xbox, no computers. He says there were no toys and he just played catch with his underpants. He jokes and says he’s a model. One asks why Howie won’t shake hands. Howard says Howie doesn’t like kids and is not nice. They all say Howard is the nice judge. One asks if Mel B smells good and Howard says not by the end of the show.

Then he gets the kids to say he’s more handsome than Nick Cannon. He says the light from Howie’s head is why he wears sunglasses. Then they talk about kissing and Howard says Heidi kisses too many people. It’s all very cute and he gives them some talent tips and sings for them. He finally gets all the kids to say he’s their favorite judge.

Howard later tells Nick Cannon when he’s done with AGT, he’s going to be a school teacher. Next is a live performance by Acro Army with live music by Little Mix. It’s very cool. The next result is The Professional Regurgitator vs Alicia Michilli. Moving into the finals is The Regurgitator! He thanks America for voting for him and says it’s a big deal for a guy from Scotland.

Heidi says she’s so happy that he’s in the finals and says he’s her million dollar act. He says if he could swallow her, he wouldn’t throw her back up. She says he should swallow anything and everything for the finals. The next result is Sharon Irving vs Paul Zerdin. Going into the finals is Paul Zerdin. The crowd is on their feet. Paul thanks the judges for lovely comments and thanks America.

Howard says America got it right and says he’s made ventriloquism and puppetry cool and says he loves that he’s a little bit rock and roll. He says he thinks the final two will be he and the regurgitator and says Paul Zerdin can win it all. Now it’s down to the Dunkin’ Save and the judge’s choice. Now Freelusion, Gary Vider and Uzeyer are back on stage for the Dunkin’ results.

America voted live to save Uzeyer Novruzov. He says he loves them all. That’s funny – the four acts going through so far are all non-Americans. AGT really loves the foreign talent. We’ve got two Brits, a Scot and a Russian – all very talented. Now the judges must choose between Freelusion and Gary Vider.

Heidi says she tells Gary not to take it personally but she prefers Freelusion. She tells them to dance more and less tech if they make it through. Howie says he likes what Freelusion did and says he liked the dance with the tech then says Gary Vider is his choice because he has to go with a stand up. Mel B says it’s tough and says they’re so different. She tells Gary he’s funny and she loves him.

Mel B says Freelusion has been brilliant from the get-go. Mel B chooses Freelusion which puts the dancers ahead of the comedian. Howard says he likes the dancers and can only judge them by their last appearance. He says there was just too much tech and the dancing got lost. He says Gary created excitement and says being a comedian is tough. He votes for Gary Vider saying he’s consistently funny.

That throws it to a tie which it goes to the viewer votes from last night. Nick reveals that Gary Vider will go on to the finals.

To round out the 10, the other finalists include:
The Craig Lewis Band
Drew Lynch
Benton Blount
Oz Pearlman
Derek Hughes