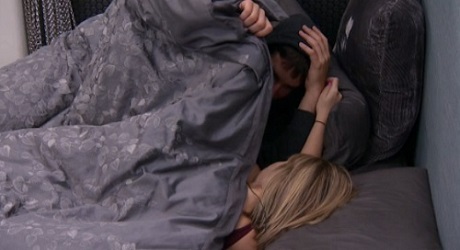 Big Brother 17 spoilers are constantly rolling in thanks to the CBS BB17 Live Feeds, and the drama in the house continues to escalate. Even though the house is gearing up for tonight’s LIVE eviction, I think it’s safe to say that everyone’s well aware of the fact that Jeff will be going home. Sure, the game of BB tells us to always “expect the unexpected.” But tonight, I think, we can prepare ourselves to rest easy and EXPECT the EXPECTED. Jeff’s gonna be walking through that door with his packed bags in hand.

We can probably expect things to tense up a bit more and the drama to bubble over in Week 4, after the new HOHs are crowned. It will be very interesting to see not only who is crowned but what moves they start planning once they take home the coveted HOH titles.

Big Brother season 17 got off to a bit of a shaky start, but now, thanks to Vanessa and Austin’s bold (yet subtle) moves and the manipulative behaviors frequently unleashed by Audrey Middleton AKA The Wild Child, things are heating up. We can’t wait to see what happens during Week 4 of the game. Vanessa isn’t eligible for HOH again, but her alliance partners, Audrey and Austin, will be strong competitors in the running towards HOHs.

If one – or both – of them took home HOH, then that could prove very good for their longterm game and plans. Do their plans include trying to split up Clay and Shelli, who were once thought to be their close friends and allies in the game? Who knows! They were seen talking about this on the live feeds and BB17 spoilers seem to indicate as much. Awww, poor Chelli.

Don’t forget to catch our recap of tonight’s LIVE broadcast episode, where we’ll see what becomes of Jeff’s fate. Can someone say EVICTED? Check out the LIVE Feed highlights below and don’t forget to keep checking CDL often for your Big Brother spoilers, gossip, news, and updates.

Big Brother 17 Live Feeds Highlights 7/13/15 (this post will be updated over the course of the day, so keep checking back often):

12:45 PM PST — Houseguests are currently playing a competition that is to remain secret until a TV broadcast.

1:06 PST — Jeff is in bed with Meg. Meg’s crying and upset, probably because Jeff’s about to get his butt evicted. Jeff tells her that she’s going to be okay in the game when he leaves. He also whispers, “All my friends are voting against me.” She laughs, but they both know it’s true. Another camera shows that Jason and John are sleeping in the same room.

1:18 PST — They continue to snuggle and whisper together in bed. Meanwhile, in another room, Clay gives James a haircut.

1:42 PST — Clay, James, Audrey, and Vanessa are in the bathroom. They talk about Jeff and one of them asks if he’ll be all right. Vanessa says she thinks he’ll be fine, especially since he had a similar experience on Amazing Race (i.e. since he lost the Amazing Race, too). She said it nicer than how I wrote it BTW.

1:47 PST — Austin and Vanessa end up chatting on the bathroom couch. Vanessa says that she feels “with every fiber of her being” that Jeff’s talking crap about her. They know Jeff’s talking beef about them, all in an effort to turn those who’ll be staying in the house against them.

4:00 PST — The Feeds are done as the Houseguests are preparing for tonight’s LIVE broadcast.