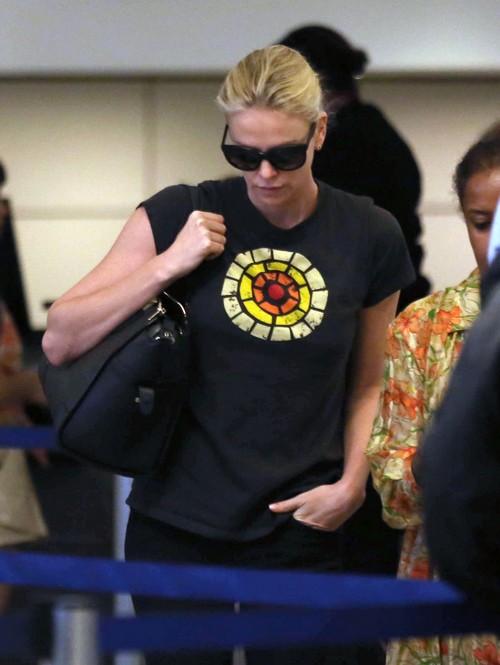 After Charlize Theron’s messy break-up from Sean Penn in June 2015 – the actress didn’t waste any time moving on, and she is now secretly dating actor Jake Gyllenhaal! According to a new report, Charlize was all torn up from her break-up with Sean Penn, so she cried on her BFF Jake Gylenhaal’s shoulder – one thing lead to another and now they are an item, and it’s safe to say Charlize isn’t losing any sleep at night over Sean.

This week’s edition of OK! Magazine reveals, “In late August Charlize and Jake were spotted dining at sushi hotspot “Sugarfish” in Los Angeles, where an eyewitness says they certainly appeared to be more than buddies. Jake’s rep denies it, but a source says that it wasn’t the first date for the pair, who have been friends for over a decade.”

Jake Gyllenhaal has a pretty impressive roster, and in the past the actor has dated Taylor Swift, Rachel McAdams, model Alyssa Miller – and lately Dakota Johnson. OK! Magazine’s insider insists that Charlize Theron is much different than his ex-girlfriends and their relationship stands a chance because, “she is strong, independent, and straight forward.” Jake is basically the exact opposite of Charlize’s ex Sean Penn too, the reason Charlize and Sean reportedly broke up was because of his temper and their constant fighting. Jake is much more laid back – according to the source.

So, it sounds like Charlize Theron and Jake Gyllenhaal could be the real deal. After both of the actors’ strings of failed relationships – could they have finally found “the one” in each other. What do you guys think? Do you hear wedding bells in Charlize and Jake’s future, or does their relationship have a short shelf life? Let us know what you think in the comments below!