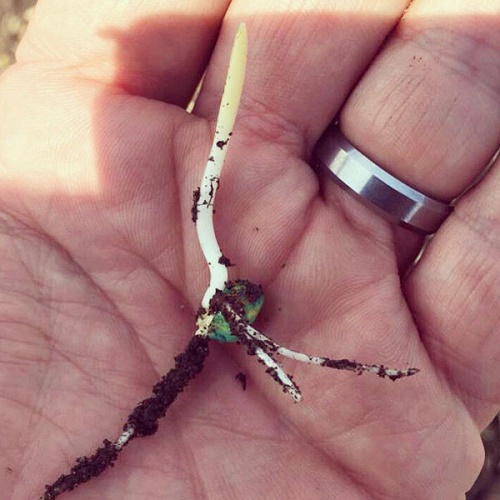 Chris Soules and Whitney Bischoff are NOT married, nor will they ever be, despite the photo that seemed to suggest Chris was wearing a ring on his finger. Fresh off his elimination from Dancing With The Stars, Chris Soules apparently decided to check on his crops in Iowa – or else he just posted a random photo online of a corn seed. Regardless of whether Chris actually travelled to Iowa first hand, he posted a photo on Instagram of a corn seed in the palm of his hand and captioned it, “Some of our corn planted last Monday, just about to emerge. Looks good!”

No one cares about Chris Soules’s corn – but his photo caused mayhem in Bachelor Nation because of the silver band on his ring finger. Rumors began running rampant that Chris Soules and Whitney Bischoff had gotten married in a secret wedding ceremony. E! Online even covered the story – and later corrected themselves and confirmed there was no secret wedding between the Bachelor stars. Shocker…

The thought of Chris Soules and Whitney Bischoff getting married in a secret wedding is laughable to say the least. Although they haven’t confirmed yet due to publicity reasons and orders from Bachelor producers, Chris and Whitney have already broken up. Whitney moved back to Chicago nearly two weeks ago and didn’t even support Chris’s last two performances on Dancing With The Stars. Why would they suddenly reunite and secretly get married over night?

And, let’s be honest, Chris Soules loves the limelight and is already shopping around for another reality TV gig.
Do you really think that he would pass up the opportunity for a huge nationally televised and all-expenses paid wedding and elope with Whitney Bischoff? If Chris Soules is eloping with anyone right now, it would be his rumored mistress and DWTS partner Witney Carson before it would be Whitney Bischoff.

So Bachelor fans, are you still holding out hope that Chris and Whitney are getting married? Or have you accepted that this Bachelor romance is basically over? What do you think about the Chris Soules/Whitney Bischoff secret wedding scandal? Let us know what you think in the comments below!