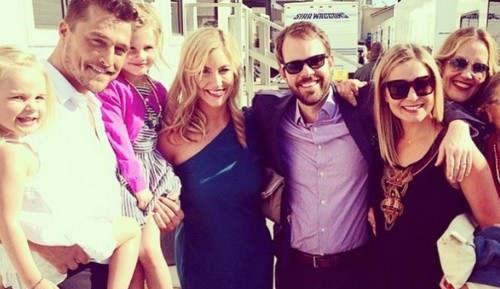 Is Chris Soules’s family sick of his fiancée? Whitney Bischoff joined The Bachelor because she desperately wanted a wedding, a baby, and a family – sadly she won the ABC reality TV dating show and Chris Soules doesn’t seem to be giving her any of those things.  But, the Chicago fertility nurse is determined to get Chris Soules down the aisle at the farm wedding she is planning – regardless of whether he wants to settle down or continue on the reality TV circuit after Dancing With The Stars.

According to insiders, Whitney has been pressuring Chris Soules to settle down more than ever – and has been planning the wedding without him, even though he refuses to set a date, and already moving her stuff in to his Iowa house.  Whitney also has inserted herself in to Chris’s family’s lives, the 2015 winner knows that Chris’s family are huge influences in his life – and thinks that if she can get them to sign off on the wedding, The Bachelor will have no choice but to go along with it.  But, Whitney’s plan is backfiring.

Whitney Bischoff’s baby fever and wedding plans are beginning to not just make Chris Soules feel smothered – but also his parents  and siblings.  A source close to Chris’s family explained, “Whitney didn’t have much family, and is eager to be accepted into Chris’s big and loving family.  She is going about it in all the wrong ways.  She is so clingy and overbearing, Chris’s parents and siblings are beginning to question if she really is the right one for Chris – and they seriously need some space from her.”

Ironically, Chris Soules took to Instagram on April 21 and posted a photo of his family after his last Dancing With The Stars performance – he posed with his siblings and nieces, and Whitney Bischoff was front and center in the photo.  We can see why Chris’s family is getting a little overwhelmed with his new fiancée, she seems to even be inserting herself in to their family photographs.  DO you think that Whitney is moving a little too quickly for Chris and his family?  His parents and siblings pressured Chris to choose Whitney during The Bachelor finale, will they pressure him to dump her as well?  Let us know what you think in the comments below!