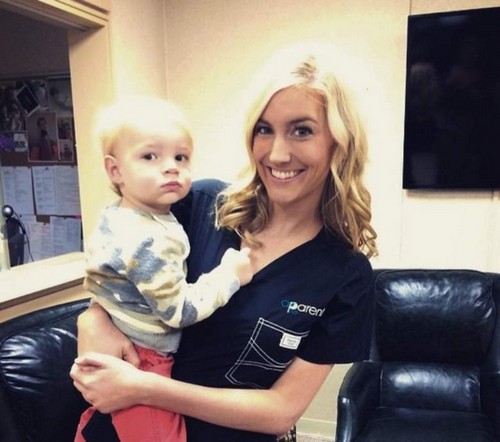 Whitney Bischoff is getting pregnant with Chris Soules’ baby and marrying him – whether he likes it or not. From day one of The Bachelor Whitney made it very clear that she joined the show because she has baby fever and wanted to get married yesterday – she did not sign on because she wanted to sit in the front row at Dancing With The Stars and watch her fiancée waltz with his girlfriend Witney Carson. Despite the fact that Chris Soules is reportedly cheating on Whitney Bischoff with Witney Carson, Bischoff is going full-steam ahead with her baby and wedding plans – Chris at least owes her that.

After The Bachelor finale Chris Soules made it very clear that he and Whitney Bischoff were not getting married any time soon and had not even set a date – Soules was way more interested in enjoying his new celebrity status and starring on another reality TV show. Apparently Whitney Bischoff did not get the memo, because while Chris has been rehearsing with his DWTS partner/girlfriend Witney Carson – Bischoff has been bragging to anyone who will listen about trying to get pregnant and the farm wedding she is planning.

Although Chris Soules is obviously not on board with babies and a wedding – he doesn’t really have a choice. Anyone who is familiar with The Bachelor and The Bachelorette can tell you that as soon as the couples break up they become irrelevant and no longer newsworthy. If Chris Soules doesn’t marry Whitney and get her pregnant – she is leaving him, and then he will lose his celebrity power and have to go home to the family farm and return to his mundane life. Right now, Whitney Bischoff holds all of the power in the relationship and she is using it to her advantage to get the babies and wedding she wanted from day one of The Bachelor.

Have you been following Chris Soules and Whitney Bischoff since The Bachelor finale? Do you think that Chris will cave and marry Whitney and get her pregnant just so that he can remain relevant and keep getting gigs on reality TV show? Is Whitney nuts for planning a wedding with a man who is openly cheating on her? Let us know what you think in the comments below and don’t forget to check CDL tomorrow for more Bachelor and Bachelorette spoilers and news.