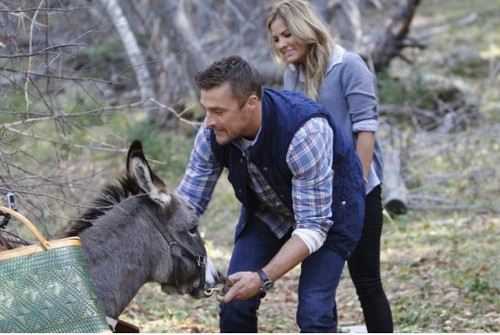 Is Chris Soules going to dump fiancée Whitney Bischoff for The Bachelor 2015 runner up Becca Tilley? Chris Soules is currently competing on Dancing With The Stars, and his fiancée Whitney Bischoff sits in the audience and cheers him on every week – determined to keep their showmance alive. But, according to new reports, Chris Soules is still hung up on Becca Tilley and Whitney’s barrage of wedding plans and talks about having a baby seem to be swaying The Bachelor from following his heart.

Anyone who watched the 2015 season of The Bachelor can tell you that Whitney Bischoff got a ring on her finger by default. Chris Soules was smitten with Becca Tilley and even confessed to his own family that he wanted to marry Becca, but she wasn’t ready to commit. The night before Chris Soules proposed to Whitney he paid Becca a visit at her hotel room in a last-ditch attempt to try and convince her to move to Iowa and get married. But, Becca reiterated that she was not ready to move to Iowa, get married, or begin having babies on the farm. So, Chris has no choice but to propose to Whitney Bischoff.

The April 27th cover of Life & Style Magazine reveals that Becca Tilley is back in Chris Soules’s life – and the former Bachelor still has feelings for his runner-up. Life & Style is teasing that Chris Soules is “having second thoughts” about his engagement to Whitney Bischoff – and for obvious reasons. Chris clearly has no intention of getting married to Whitney, instead of returning to the farm with her he joined another reality TV show and he refuses to set a wedding date. It seems like he has been holding out hope that Becca Tilley would come around and decide she was ready for a serious relationship, and she finally has.

What do you think Bachelor fans? Will Chris dump Whitney for Becca Tilley? Is Becca finally ready to commit and settle down? Is she the reason Chris won’t set a wedding date? Let us know what you think in the comments below!