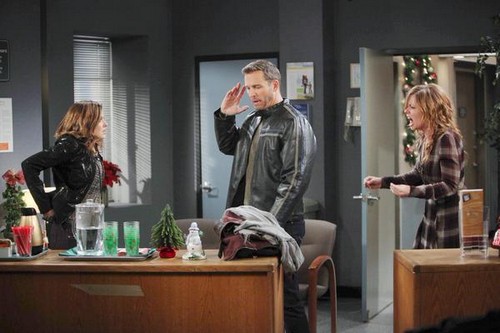 “Days of Our Lives” spoilers and news tease that January 12-16 will be another exciting week of drama in Salem, and rumor has it DOOL fans will not want to miss a single episode. According to spoilers, sparks will fly between some Salem couples and a new rivalry will really heat up. Here is what “Days of Our Lives” fans can expect to see this week on the NBC soap:

Monday January 12: “Days of Our Lives” spoilers for Monday’s episode of the NBC soap reveal that the love triangle forming between Paul, Will, and Sonny will take another interesting turn. After getting turned down by Sonny and pursuing Will, Paul Norita decides that his heart belongs to Sonny and begs him to give their relationship another chance.

Tuesday January 13: With all of the relationship drama in Salem, sometimes we tend to forget about the business aspect of things. “Days of Our Lives” spoilers tease that on Tuesday’s episode DOOL fans can expect to see a war of words between Victor and Clyde regarding their shady business dealings.

Wednesday January 14: Victor is not the only person in Salem with an axe to grind with Clyde, “Days of Our Lives” spoilers reveal that on Wednesday’s episode Clyde drops another bomb on Jordan regarding the death of her mother. In other “Days of Our Lives” news, on January 14th Eve is at her wit’s end with her old nemesis Jennifer and nearly tells her that she slept with JJ just to spite her.

Thursday January 15: “Days of Our Lives” spoilers have been teasing a romance between Brady and Melanie for quite a while, but on January 15th the lovebirds decide that for now they are going to keep their relationship form their friends and family. However, keeping it a secret proves to be much harder than they thought it would be when someone catches them kissing.

Friday January 16: According to “Days of Our Lives” spoilers, on January 16th fans can expect to see some love in the air as Adrienne and Lucas Horton continue to bond and grow closer. Rumor has it that Wally Kurth is headed back to Salem as Justin Kiriakis and Adrienne’s husband’s arrival will stir up some drama for her and Lucas.

So DOOL fans, do you think Sonny will actually take Paul back, is his marriage to Will over? What secret do you think Clyde reveals about Jordan’s mom? Who catches Melanie and Brady kissing, could it be Theresa Donovan? Let us know what you think in the comments below and don’t forget to check CDL tomorrow for more “Days of Our Lives” spoilers and news.