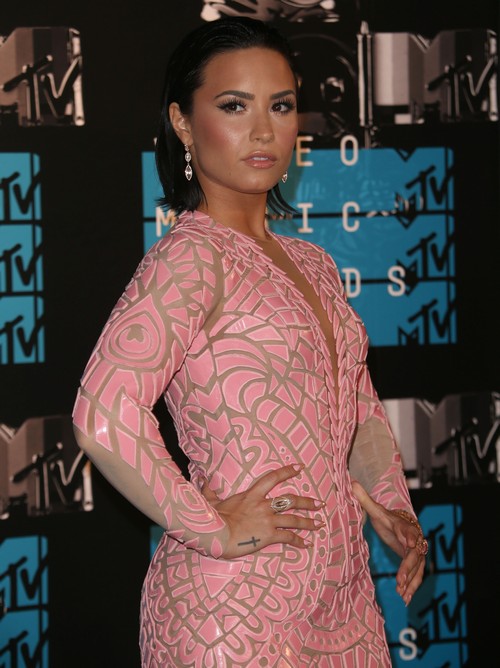 Nicki Minaj isn’t the only who was throwing shade at the VMAs last night – Kathy Griffin and Demi Lovato went at each other after Demi’s VMA performance. Here’s how it started and where it stands now. Kathy Griffin wasn’t at the VMAs (you know, because she’s 54) but she was watching the show, likely with a few cats and a large glass of wine… and tweeting.

Actually, I like Kathy Griffin. She’s very funny, but in a caustic sort of way. And boy was the semi-elderly cat lady letting VMA guests have it. She had some great remarks – Kathy asked why Kim Kardashian can’t smile and Kanye West look so miserable (my guess is because they both live with Kanye West). Kathy also had a great line, “Does Kanye have a #dadbod?”

Then she quipped, “I just love when two or more multimillionaire lip-synchers battle” about Taylor Swift and Nicki Minaj’s performance. Kathy Griffin snarked, “There are not enough Trojan condom ads for the cast of Teen Mom 2” and busted Miley Cyrus and Nicki Minaj for their bitch off. The bulk of the recipients of Kathy Griffin’s sarcastic attention ignored her – because she’s Kathy Griffin, right?

But Demi Lovato went off after Kathy Griffin tweeted: “Demi’s live singing was very obviously live if you know I’m saying. And then the rest of the track or tracks. #atleastshesang-ish.” Demi slammed back with: “Happy 2 see ur still stanning me @kathygriffin. Dont worry, my new album is out Oct 16. But u prob already knew that.” This was accompanied by an illustration of a crotch blowing a kiss.

For those of you who aren’t current on your urban dictionary vocabulary, stanning is being an uber-fan. Then Demi’s rabid fans went on the attack against Kathy Griffin as well calling her an old c*nt, telling her shut the f-k up, and the lovely comment “you’re literally asking for another round of death threats, log the f-k out.” Wow. Demi as literally the brightest and sanest fans on the planet.

Don’t get me wrong – I sort of like Demi Lovato and I do think she’s talented – much more so than the Aussie “rapper” Iggy Azalea that “sang” with Demi. Twitter hated on Iggy Azalea last night as well as Kathy Griffin. This latest salvo in the Kathy Griffin vs Demi Lovato war is not as nasty as their last go-round last year.

In 2014, Kathy was asked who she thought was the “biggest douche celebrity” that she’s met and she immediately tweeted back the answer “Probably Lovato” and said that Demi “should calm the f-k down about Lady Gaga getting barfed on.” That last referred to Demi Lovato attacking Lady Gaga over a vomiting stunt at SXSW.

At the time, Demi tweeted, “Sad… As if we didn’t have enough people glamorizing eating disorders already. Bottom line, it’s not ‘cool’ or ‘artsy’ at all” and then later adding “Would you let someone bring a needle and shoot up on you? Addiction is addiction.” Basically Kathy Griffin is saying – accurately, it would seem – that Demi Lovato and her fans can’t take a joke.

After the douche comment, Demi tweeted back at Kathy a photo of herself with her tongue stuck out, captioned with “only a ‘douche’ to people I can’t stand.” Even if Demi herself is not douche, as Kathy alleges, it seems that her fans certainly are. Lighten up people – Kathy’s a comedian. It was funny commentary on an overblown event that deserved a little shade…