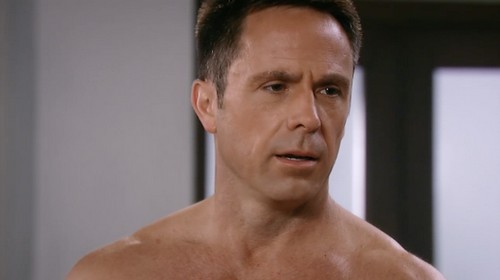 Check out these “General Hospital” spoilers for the Thursday June 4 episode of the hit ABC soap. First, Nathan West (Ryan Paevey) is ready to push hard on sister Nina Clay (Michelle Stafford) to get her away from the evil plotting of Ric Lansing (Rick Hearst). Nathan shows up and tells Nina he’s ready to make an arrest. Is Nathan going to arrest Ric for fraud or is he threatening to put Nina behind bars until she comes to her senses? Either way, Nina is feeling confident with her safe full of cash from the ELQ stock she sold off and will call his bluff. However, Nina is also feeling really bad that she stole the shares from Franco (Roger Howarth) and sold them to the first buyer that came knocking.

Meanwhile, Denise DeMuccio aka Ava Jerome (Maura West) pushes Silas Clay’s (Michael Easton) buttons. Silas gets confrontational and tells her to cut the crap. As a favor to the audience, Silas explained on Wednesday exactly how he saved Ava’s life using Avery’s bone marrow. Silas is crazy coming to confront Ava when he knows how crazy she is. Ava will admit to being Ava but will threaten to take him down with her if Silas exposes to anyone who she is. She’ll tell Silas that she just wants time with her family and will blackmail him into silence.

Also, Dante Falconeri (Dominic Zamprogna) tells mom Olivia Falconeri (Lisa LoCicero) that she can bring his baby brother home since Julian Jerome (William deVry) is out of the mob business. Olivia will be in denial mode and won’t want to acknowledge this possibility and thinks he may backslide. She doesn’t want to put her newborn son at risk and you really can’t blame her. Dante will try to reason with Olivia, to no avail.

Also on the Dante front, he will soon have the chance to get closer to Valerie Spencer (Brytni Sarpi) even though Lulu Spencer (Emme Rylan) won’t like it. Valerie heads to the Port Charles police department for her interview with the commissioner and is stunned to see it’s not Sloane (Grayson McCouch) but the new Commish Jordan Ashton (Vinessa Antoine). The shock wears off quickly as Commish Jordan offers Valerie a job.

Valerie is thrilled to say yes and wants to take Dante and Lulu out on the town to celebrate. Lulu, of course, won’t be thrilled since the new job means that not only is Valerie in Port Charles for the long haul but will be hanging with Dante on the daily. Interesting also that Lulu’s big bro Nikolas Cassadine (Tyler Christopher) could have easily shut down the job but chose not to and lied to Lulu about not having any influence. What is Nik up to in this regard? No good, I’m sure.

Meanwhile, Lulu gets another shock (but a pleasant one) when she sees Dillon Quartermaine (Robert Palmer Watkins) at the Q mansion playing with baby Avery. Will Lulu embroil her old bed mate and partner in crime Dillon with her plots against Valerie. Maybe she’ll get Dillon to seduce and dump Valerie to try and run her out of town heartbroken. Who knows? Dillon and Lulu are capable of anything and they play dirty.

Also, Luke Spencer (Anthony Geary) goes to see Anna Devane (Finola Hughes) as part of his farewell to Port Charles tour. Luke will offer deep condolences on the loss of Duke Lavery (Ian Buchanan) but Anna will still be in a bad place feeling guilty about doing the horizontal mambo with the delectable ex-Commish Sloane (Grayson McCouch). It will be a nice reunion though and just in time since Anna is heading off before Luke since Hughes has a directing gig this summer that will take her off the show.

Lots going on with Luke, ELQ, Nina and Fake Ava. Don’t miss a moment and be sure to head back to CDL often for lost more “General Hospital” spoilers, gossip and news after you watch your fave soap.