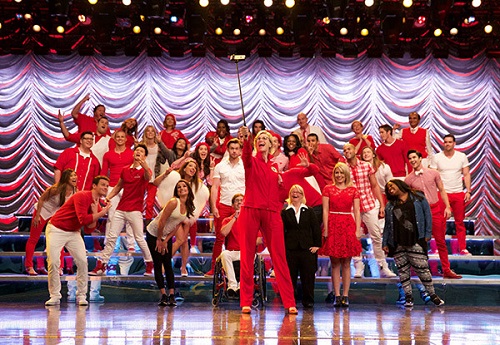 Gleeks, the time has come! On March 20, the two-hour final episode of the groundbreaking series Glee will air on FOX, bringing an end to the show that brought immeasurable amounts of musical talent to the small screen nearly every week for six years. Glee first premiered in 2009, immediately singing and dancing its way into the hearts of millions. Many fans will be sad to see this show go, but if Glee knows how to do one thing, it is put on a good performance! The finale is likely to be one that we will never forget!

According to HollywoodLife, the final episode will flash back to 2009, and flash-forward to 2020, giving us a peek of what the future might hold for the talented and lovable members of the McKinley High Glee Club! Pictures from the episode have been released and are giving us a little taste of what’s to come! There are a few flashback photos of the crew back in high school, along with a picture from the flash-forward of the members of the glee club-minus Rachel- yelling excitedly in front of a TV. Now, what could possibly be so exciting? There are a few things I can think of…

There is no doubt that Glee’s final episode, titled ‘2009/Dreams Come True’ will be filled with an abundance of flashbacks, nostalgia, and, of course, a ton of musical numbers! Although we cant be sure what exactly will happen on March 20, we can be more than certain that Glee will leave us with an epic goodbye and a song in our hearts!

What have you thought of this season so far? Do you think the characters and storylines have been strong enough and worthy enough to end the series that’s garnered an almost cult-like fanbase? Leave your thoughts in the comments section below, and warm up those vocal cords, because you’re sure gonna want to sing a long as Glee unleashes their final notes.

Keep CDL on your radar for future Glee spoilers. Check out the pics below!