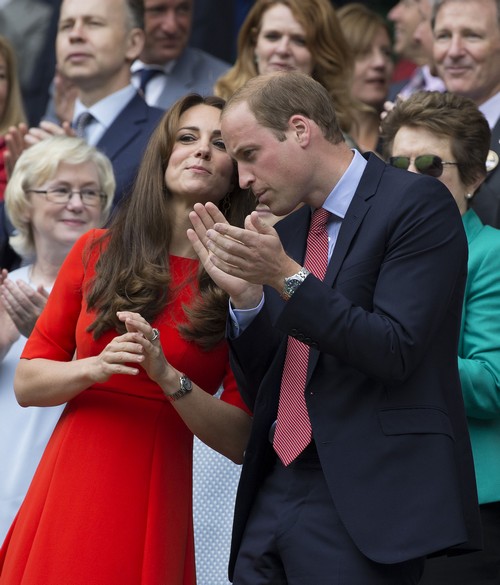 Kate Middleton and Camilla Parker-Bowles have a strained relationship, but their feud has taken a drastic turn. The Duchess of Cornwall is desperately making a grab for power, as a cheating scandal challenges her relationship with Prince Charles and the memory of Princess Diana, constantly evoked by Kate, overshadows her presence.

It’s no secret that Kate Middleton is orchestrating a royal revolution. Part of that revolution is to ensure the Middleton family is not swept aside. Typically, commoner in-laws are pushed out in favor of royal blood. The Middletons, led by Carole Middleton, have taken over Prince William and Kate’s home in Anmer Hall. Together, they have slowly begun to break royal protocol and raise Prince George and Princess Charlotte with middle class values.

As the Middleton family has taken control, Prince Charles has been the one seemingly pushed aside. The heir to the throne lamented that he never got to see his grandson, Prince George, thanks to Carole Middleton calling the shots. An article by GLOBE claimed Camilla was being ousted from Prince George and Princess Charlotte’s life after she was caught cheating on Charles with two different men. William, furious, allegedly banned Camilla Parker-Bowles from seeing the royal children. More bad blood allegedly erupted when Kate planned Princess Charlotte’s christening, and paid homage to Princess Diana with little details like the use of her favorite photographer and holding the ceremony in the same church Diana was christened in.

However, in recent weeks Camilla has been spotted in the company of the Duke and Duchess of Cambridge. During the Queen’s birthday parade, Trooping the Color, Camilla and Kate shared a carriage. The following day, Prince Charles, Camilla, Kate, William, and Prince George were seen chatting together after a charity polo match in images shared by the Mirror. Charles has also gotten more access to his grandchildren, according to People. The duo have been spending time planting trees and gardening together at Charles’ home, Highgrove.

It may seem like Kate Middleton and Camilla Parker-Bowles are simply playing nice during official royal engagements, but the Daily Mail has shared a report that paints a very different picture of Kate and Camilla’s relationship. While GLOBE reports that the Duchess of Cornwall recently compared Princess Kate to the Kardashians, the insider sharing details to the Daily Mail claims, “Katherine knew that her parents weren’t happy being seen as the more involved of the two sets of grandparents. Frankly, she felt it embarrassed them.” The source went on to detail, “William saw it, too. Everyone knew the Prince of Wales was quite hurt, not only on his own behalf but on Camilla’s as well. He’s as protective as ever of her role in the Royal Family.”

It seems like a complete change in the relationship, and Prince William has never really appeared “protective” of Camilla Parker-Bowles, but the report goes on to state that Kate and Camilla are like gal pals. “Camilla has been very comforting for Kate — and amusing, just as she used to be. There’s no one better at girl-talk — and since Princess Charlotte was born there has been plenty of that.” Maybe this peace has to do with Prince Charles’ spoiling his children with a multimillion dollar allowance? Thanks details shared by People, it was revealed that Charles gives Prince William and Kate a hefty yearly allowance to cover some expenses.

Has Kate Middleton and Camilla Parker-Bowles’ feud really taken a drastic turn? Is Camilla trying to grab for power by making friends with the Duchess of Cambridge? Let us know what you think in the comment section below!